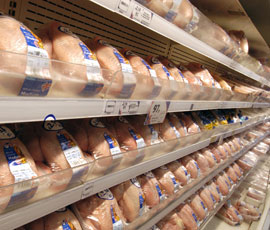 Tesco’s announcement that it is dropping its specification for non-GM soya in broiler and layers’ rations has been met with a mixed reaction.

The supermarket published a statement from its group technical director, Tim Smith, explaining that sourcing non-GM soya was becoming increasingly difficult, and that cross-contamination with GM was increasing.

It said that the supermarket could no longer guarantee that feed would not be contaminated with GM, so it could no longer uphold its contract specification for non-GM soya. “We want to be upfront about the changes we are making,” said Mr Smith.

“Over recent weeks UK poultry and egg suppliers have been telling retailers that it is increasingly difficult for them to guarantee that the feed they use is entirely GM free. We could not continue with a promise we cannot be sure it is possible to keep.”

Mr Smith added that the Food Standards Agency had made clear there was no risk to human health from eating animals that had been fed GM feed.

Poultry World asked Tesco how the move would affect pricing, as non-GM soya attracts a premium of up to £100/t. A spokesperson said that the descision was not motivated by cost. She said: “Where suppliers can still supply non-GM feed, under the terms of their contract, we will of course continue to pay a premium for this.”

Tesco joins Morrisons, which removed its non-GM specification last year, and Asda, which allowed GM in 2011.

The NFU’s chief poultry adviser Kelly Watson said that the move was welcome. “The poultry industry has been struggling to secure supplies of non-GM soya as Brazilian farmers move to more sustainable GM alternatives, therefore it can no longer guarantee that the feed only contains non-GM soya.

“Tesco should be congratulated for taking this proactive approach and being open with its customers.”

The British Poultry Council said: “GM crops are highly regulated in terms of health and environmental safety. They have been used in the UK to feed livestock, including poultry, destined for the retail supply chain around the world for the last 15 years.”

It added “the likelihood of accidental GM presence is much greater than ever before and so it is no longer possible to guarantee that feed is entirely GM-free”.

However, organisations opposed to GM have been quick to slam Tesco’s decision. Pete Riley, of GM Freeze, said that the concession badly let down the supermarket’s customers, and that its “contentious” statement was “misleading and inaccurate”.

“For the last decade or more they could have invested money in securing non-GM soya supplies as Carrefour have done in France but instead they have ignored their customers’ concern. A big company like Tesco could and should be able to source non-GM animal feed through established certification routes from Brazil and label their products as non-GM fed.”

Peter Melchett, policy director at the Soil Association, said that Tesco was wrong. “They have swallowed the line being pedaled by pro-GM, multi-national, industrial farming companies. In Brazil alone, there is enough non-GM animal feed to supply the whole of Europe.”

Dr Helen Wallace, director of GeneWatch UK, also condemned the move. She said that the supermarket was “caving into pressure from Monsanto and its allies”.

HOW THE NEWSPAPERS REPORTED IT

Following the publication of Tesco’s letter on its “food news” website, national newspapers quickly turned around stories that were altogether negative about the move. The Daily Mail‘s article claims that the “U-turn was dictated by farmers”. It continues: “This suggests the diet of families in the UK is effectively being controlled by US biotech companies responsible for creating GM crops.” The Mail article also repeatedly uses the term “Frankenstein foods”.

The Independent said in its coverage “new farming methods meant it [Tesco] could no longer promise that its birds had a diet free of GM material”.

“The bad weather of 2012 has turned many British farmers on to GM crops, with calls from farming leaders to start using the technology as a way of reducing costs and limiting wastage in bad seasons.” The article is ambiguous about what these farming methods are and if the farmers are in Britain, or elsewhere.

The Grocer, trade magazine for the retail industry, also wrote that Tesco had “caved in to pressure from farmers”.