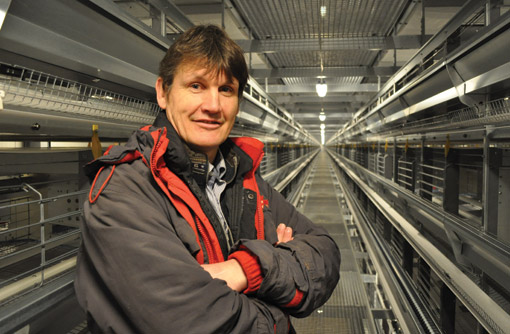 At more than £850,000, the recommissioning of a defunct 32,000 conventional cage unit into an extended 85,000-bird colony system has been a major project for Heal Eggs.

Tony Heal told visitors to a recent open day at the mixed farm business at Stanton-upon-Hine, Shropshire, the redevelopment was the key to modernising the family’s poultry enterprise.

“We had a decision to make over whether to continue with colony eggs or concentrate on free range. We have 120,000 free-range birds in four units, with another 40,000 birds on this site.

“But as some customers still wanted colony eggs, and as we have a site with good access direct on to a main road, it made sense to redevelop here rather than a greenfield site.

“Seven months ago the old cage system was stripped out using farm labour. Contractors came in early November and by the last week in January we were ready to populate.

“Initially, 16 weeks was scheduled for the refit, but it’s been completed in 14 weeks; it’s the first project we’ve had done that’s kept to time, despite a two-week delay at the start,” explains Mr Heal.

The business used different contractors for erecting colony equipment, for upgrading ventilation and for electrical installation. 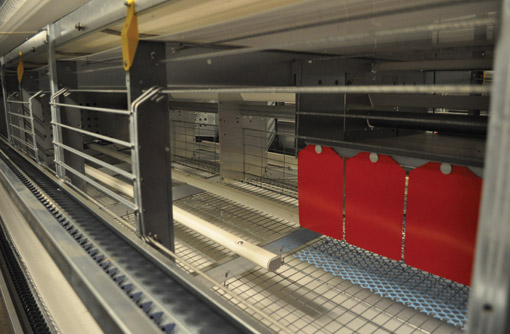 According to Neil Davies of LA Systems, the Hellmann installation is the largest the firm has overseen.

“It’s four rows of nine-tier cages across three floors. Each unit is for just 24 birds all housed in shallow cages. This allows the stockman to reach all the birds easily, helping with routine husbandry tasks such as daily observations, medical or veterinary treatments. It will also make emptying cages at the end of each cycle easier to manage.”

Each compartment is 241cm long, 69cm deep and 65cm tall. It allows 767sq cm/bird and has one single nest box, an elevated scratch area and an external, deep-walled feed trough.

According to Hans Odener, sales director with Hellmann, the raised scratch area allows producers to utilise the 20cm height rule, enabling some to fit an extra row of cages depending on house width. “This system has a perch set-up specific to the UK, but aside from that it’s similar in design to those of other EU markets.

“Although we speak of one Europe, the cage design for each country can vary considerably. Producers either look for egg quality and feed cost savings, or simply low investment.

“The tendency outside the UK is to have deeper cages as the cost is less. How that impacts on egg quality remains to be seen. There are also questions over whether a central feed trough has hygiene and bird safety issues,” he says.

The practicalities of designing a system for the 120m-long unit are well within company’s experience, says Ernest Bloemen, technical director for Hellmann. “Each row uses just one drive motor per line, saving cost. We have longer lines running elsewhere in Europe without intermediate drive motors. With regular maintenance, such as lubrication and replacing bearings, the lifespan should be 20-25 years.”

From Mr Heal’s perspective, colony size was the primary consideration. “We want to be able to see every bird and reach every bird. We’d been to a lot of units and the fad at the time was for larger colony size.

“But we’d also seen a lot of second-quality eggs. As a producer rather than a producer/retailer that was a concern.

“We need to maximise first-quality eggs. The fact that, with a smaller colony size, all the birds can get in the nest box, virtually halves the seconds. The scratch area can be easily managed so birds don’t lay in there.”

An external feeder was selected to reduce waste and spoilage. “It’s a clean system, being outside the bird’s area. You would hope with being new technology there will be an improvement in feed conversion. But the old cages – albeit 18 years old – were Valli systems and they were good.

“It’ll take 12-24 months to know what actual improvements on the feed use have been achieved.”