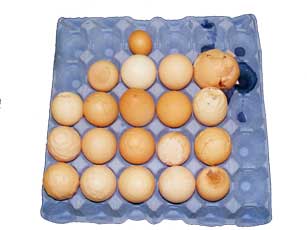 Egg production is a complex and delicately balanced process for chickens – the slightest disruption can have a dramatic impact on egg quality. Stress is one of the commonest triggers, but disease, nutrition, bird age and handling also play an important part.

Speaking at a recent West Country Layers’ Association conference, Dr Maureen Baine, senior lecturer at Glasgow University Vet School, said it was important to understand the production process. “The egg is primarily designed as an incubation chamber for an embryo – the membranes and shell have pores to allow gaseous exchange, and the cuticle around the shell protects against bacterial entry.”

The yolk – or ovum – develops in the ovary, then travels down the oviduct, acquiring layers of albumen and membranes, and passing into the uterus six hours after release. It remains there for about 19 hours, as the eggshell is formed. Once laid, the next ovum is released, resulting in a daily cycle.

“It’s really important that birds are not stressed during the initial stages of shell formation, because if you get the foundations wrong the rest of the shell will be affected.”

Variations in size and shape

Eggs with slab-sides or target rings happen when two eggs are present in the uterus at the same time. Usually there is one hard-shelled egg, which should have been laid, and a soft-shelled egg, which lies up against it, causing the demarcations.

Those with equatorial bulges have been cracked in the uterus during early stages of calcification, usually because sudden stress has caused the uterus to contract. The cracks are then resealed and the egg laid as normal.

Rough textured eggs may be caused by mycoplasma or other diseases. But accretions – or pimples – on the shell surface are likely to be the result of localised membrane faults, most common in older birds.

Hairline cracks occur when eggs collide during collection or grading, and micro-cracks may be caused by poorly adjusted crack detection devices. Other cracks and holes can occur from beak or toe damage in the laying box.

Shell-less eggs, or those with thin shells, have been laid prematurely, before calcification is complete. This is common in young birds coming into lay, but is also caused by stress and poor laying environments.

Brown pigmentation is laid down in the final two to three hours of shell formation – so pale eggs are likely to have been laid prematurely. However, egg colour also varies according to nutrition, breed and individual birds.

Chalky eggs – where extra calcium has been laid down – are the result of retention in the reproductive system for more than 24 hours, perhaps where hens are not comfortable in the laying environment.

Egg cuticles can be damaged by washing, but also vary according to age and stress. Staining eggs with food dye will identify problems – coloured areas show good cuticle coverage. However, varnished eggs are those covered in another egg’s albumen.

When candled, eggs often become translucent; this happens when holes in the membrane or the shell structure allow moisture to escape from the albumen into the shell. Translucent streaks are similar, more localised occurrences.

A fresh egg will have viscous albumen and yellow yolk; those stored for too long become runny with pale or spotty yolks. Storing eggs below 10C will keep them fresh for longer. Pale yolks are also linked to breed and nutrition, with spots sometimes the result of worming products, while albumen is influenced by stress, viral infections and the age of the flock.

The chalazae, which looks rather like an umbilical cord, is a normal egg feature which stabilises the yolk and albumen. But any blood spots indicate haemorrhage in the oviduct – potentially a normal process of ovulation, or the result of stress or viral infection. Meat spots are also a normal occurrence, where blood cells or tissue detach from the oviduct during egg formation.