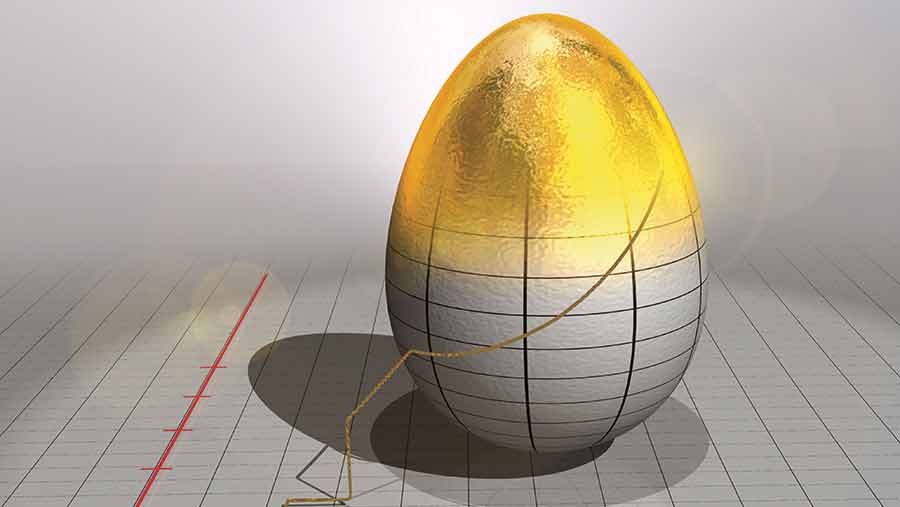 The sample size of the Farm Business Survey of poultry farms may be small, but it gives a good picture of where profits were made and margins lost in the 2014-15 financial year.

The report that informs Defra’s farm income figures shows downward pressure on both poultrymeat and egg farm profits in the financial year 2014-15.

While November’s annual release of headline farm business incomes invariably puts poultry profits – a combination of meat and eggs – as impressively high, the figures, once broken down, paint a different picture.

Growing labour costs, deprecation and feed prices all continue to exert pressure on profits even as some prices improve and other inputs, such as wheat, lose value.

A consortium of universities named Rural Business Research compiles the numbers. It considers some 1,409 farm businesses to be specialist poultry operations, with an income above the minimum threshold of €25,000 (£19,500).

This year, 83 farms were included in the survey, which takes data directly from accounts – making it a true reflection of business performance.

The full report, released in May, shows broiler farm incomes down 10% over the period, and a 44% average fall in income for layer farms. Feed prices fell 4%.

According to Rachel Lawrence, of Rural Business Research at the University of Cambridge, egg farm incomes dropped dramatically when compared with the previous year, from £95,653 to £53,998.

Flock size was up some 15%, with farms surveyed now recording an average of 26,974 birds on each farm.

What is interesting, according to Ms Lawrence, is the spread in egg price – up to 10% – between the businesses, indicating a wide variety of differing contracts between individual farms and their packers.

“The arrangements we hear about on farms with various buyers suggest farmers don’t have much room for negotiation,” she said.

For broiler farms, gross margins improved, but overall profits were down.

There was a strong indication the farms were becoming more efficient, explained Ms Lawson, spending less on feed, medicine and veterinarian bills. Despite this, output increased.

“It was actually their fixed costs which have increased; in particular labour, and building costs. A lot of this is coming as rent or in depreciation,” she added.

Despite an improved gross margin of more than 9%, the rise in the fixed costs meant that the FBI per business reduced by nearly 10% to an average of £187,700.

Broiler farmers in the independent sector also registered about a 10% reduction in profits over the period.

The survey said feed cost across both sectors, as a proportion of output remained largely static, at £48 of every £100 spent.

Ms Lawrence suggested that, while wheat had dropped significantly, other components of birds’ diets had gone up.

“Feed cost dropped per bird,” she told Poultry World, “but because output has increased, overall spend hasn’t really changed that much year on year.

“I think it’s because prices are not as negotiable as you are sometimes led to believe they might be.

“Much as the wheat price may have dropped, you’re not just buying in wheat. It’s the other ingredients that cost the money and they only ever seem to go up.

She added it was soya and other proteins keeping prices firm, and accounting for the figures, which run counter to large price drops in other feeds in the past four years.

Ms Lawrence said it was likely that the biggest influence on the results from this year’s survey would be the introduction of the new living wage. “This year is already a pre-living wage and we already see a significant increase in labour costs,” she explained.