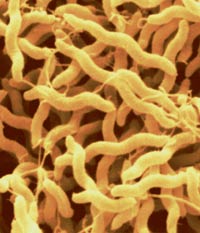 Campylobacters are the main cause of bacterial food poisoning in the British Isles, and most developed countries, and poultry is seen as a major source of human infection.

A recent study analysed 110 packs of retail chicken from UK producers and found that 108 of these had campylobacter. In Northern Ireland, campylobacters from clinical samples and retail poultry were compared, using genetic fingerprinting. This showed that about 75% found of the human isolates were effectively the same as isolates obtained from the retail poultry.

Considerable research has shown that relatively simple biosecurity can markedly reduce the incidence of campylobacter-positive flocks, therefore control is possible, but broiler producers are in the front line and they need to know the “how and why” of campylobacter control.

In this project, researchers from the Queen’s University of Belfast and AgriFood and Biosciences Institute reviewed latest research to produce advice and then held a series of meetings with broiler producers across Ireland.

For a biosecurity routine to be successful, the underlying sources of campylobacter need to be investigated. The external environment is believed to be the major source of infection, acting as a reservoir from which other farm animals, rodents, wild birds, insects, people and equipment can spread the pathogen to the flock.

Cattle in particular have been highlighted as a risk factor as they “amplify” campylobacter numbers in the environment. People are also a major risk factor and every visit to a broiler house has the potential to introduce infection. The effects of personnel are greatest during thinning due to increased movement on the farm with the introduction of catching teams and transport equipment. Also the stress caused by the disturbance could make birds more susceptible to infection. Increases in campylobacter infection (positive houses) of up to 85% have been noted after thinning.

The success of simple biosecurity measures at protecting flocks in Scandinavia is promising. These simple interventions include having anterooms in broiler houses with physical hygiene barriers to separate them from the outdoors with dedicated clothing and footwear on the bird side of the barrier plus a hand wash basin to use before putting on this clothing.

Norway has seen yearly reductions in positive flocks since introducing its action plan, and introduction of Norwegian like methods to a UK farm saw a 67% drop in infection rates in one study. A novel method of using fly screens to increase biosecurity in Denmark gave promising results. Using plastic mesh screens over ventilation systems and other inlets reduced the number of flies by 94.4%, and the campylobacter infection rates in the peak months fell from 50% to 15%.

During this all-Ireland study feedback from meetings with broiler producers was positive, with the majority of farmers indicating that they could incorporate at least some of the measures suggested on their own farms.

Researchers in the US estimate that a commercial campylobacter vaccine will be available in 3-5 years which would greatly reduce numbers in broilers at the farm level. Work on competitive exclusion products and bacteriophages could also reduce numbers on-farm.

During slaughter and processing, maintaining good hygiene and separating positive and negative flocks decreases the risk of cross contamination. In the kitchen avoiding direct and indirect contact between raw meat and uncooked foods as well as thoroughly cooking poultry will also reduce risk of infection.

In conclusion, campylobacter numbers need to be reduced throughout the production process in order to reduce the risk to the consumer. Reducing numbers at the source through on-farm biosecurity is a good start, and along with complementary control measures could go a long way in reducing the incidence of human campylobacter infection.

The problem: An ever increasing number of studies point to fresh chicken products as the major source of campylobacter infections worldwide. This project aimed to give producers in Ireland the latest practical advice on reducing its incidence in flocks.

Who conducted it: The project leader was Robert Madden of the Food Microbiology Branch, the Agri-Food and Biosciences Institute, Belfast, supported by Steven McMaster of the Queen’s University of Belfast.

Funder: Safefood, The Food Safety Promotion Board, which has a remit throughout the island of Ireland.