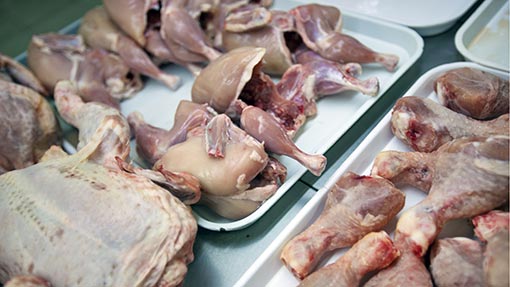 The trade association representing UK retailers has written to the Food Standards Agency (FSA) questioning its plan to “name and shame” supermarkets in its campylobacter testing halfway through the programme.

Andrew Opie, director of policy at the British Retail Consortium (BRC), has written to FSA chief executive Catherine Brown raising concerns over the validity of publishing six months’ worth of data.

The letter was highlighted by Ms Brown in her report to the FSA board, in which she expressed disappointment in the trade body.

Mr Opie wrote that the market share used to determine sample size, taken from 2010 Kantar data, was out of date given changes in the retail landscape since then.

Further concerns raised by the BRC include the hope the survey would take into account regional differences in campylobacter levels and the fact that testing occurs during different points of chickens’ product life. There is evidence some reduction in campy levels can occur over the shelf life of a bird.

The FSA is undertaking 12 months’ testing of campylobacter levels on poultry at retail level. It originally said retailers would be named and shamed each quarter, before reversing that decision and saying a full year should pass before names were published. In September, it changed its position again, saying supermarkets would be named six months in.

Ms Brown said in the report to her board she was “disappointed” the BRC had written “pressing us not to release the results of the retail survey and seeking to call into question the validity of the sampling plan, which they were consulted about before the survey commenced”.

Mr Opie told Poultry World he was surprised at this reaction. “We were simply questioning whether it was wise to publish data at this stage, and asking for confirmation that there was evidence behind the survey results that would give consumers clear information.

“The FSA findings at this stage are limited, based on a very small sample.”

He added there was no commercial solution to campylobacter, but as soon as one became available, industry would adopt it, regardless of the publication of testing data.

The campylobacter figures are expected to be published mid-November.