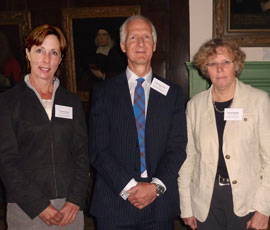 Two leading UK university scientists have been recognised for their outstanding contribution to animal welfare.

Professor Marian Dawkins of Oxford University and Professor Christine Nicol from the University of Bristol were declared winners of the prestigious Universities Federation for Animal Welfare (UFAW) Medal, at the Federation’s conference in York in June. They were presented with a medal and £3,000 at the event.

The UFAW Medal recognises exceptional achievements of individual scientists worldwide, who have made fundamental contributions to the advancement of animal welfare over the years.

Prof Dawkins, who specialises in animal health, pioneered the use of preference tests to seek hen’s own views on aspects of their environment.

Meanwhile Prof Nicol, an animal health lecturer at Bristol University, undertook a PhD into behavioural needs of battery hens. Her work formed an important part of the evidence used by EU veterinary and scientific committees to implement the ban on conventional cages for laying hens.