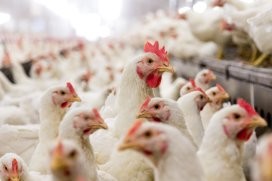 But RSPCA Assured has hit back, claiming only a small number of farmers had come forward and asked for help, and those that had were able to find space for additional enrichments.

In July 2016 the RSPCA revised its standards for laying hens, requiring farmers to retrofit at least 15cm/bird of perching space in barns. It argued this would bring perching provision in line with free-range producers in Northern Ireland, Scotland and the rest of Europe.

Farms in England have historically been able to claim slatted floors as perching space, reducing the need for aerial perches.

And the British Free Range Egg Producers Association has long argued that retrofitting perched would be impossible for many of its members, particularly those keeping hens in older sheds. Flat deck and mobile housing has proved especially difficult, according to BFREPA chief executive Robert Gooch.

“Since the revisions were first introduced in July 2016 I have been pointing out the difficulties many producers will face retrofitting aerial perches into single-tier houses,” Mr Gooch said in a letter to the RSPCA.

“The design of some producers’ houses makes it practically impossible to achieve.

“We are now coming up to crunch time in terms of implementation and RSPCA Assured must step up to the plate and provide the resources to show how to deliver this new standard imposed on producers.”

He added that producers placing flocks after August this year would have to provide 8cm of perches per bird to remain compliant with RSPCA Assured.

“Aerial perching places a load of two tonnes per 1,000 birds, and many house structures were not designed to take this extra weight,” Mr Gooch said.

“RSPCA Assured should provide time-limited concessions for those attempting to meet the standard, and derogations for those whose house structures are unable to take the loading for the health and safety of both birds and the farmer and their staff.”

The RSPCA said its new standards should be “stretching but achievable”, and ultimately improve welfare.

It also said only a “small number” of individual scheme members had been in contact with concerns, and those who had were able to implement the perching with the RSPCA’s support. It urged those unsure about the new rules to get in touch.

“The reality is that, to date, the RSPCA have been able to find areas where the perches can go in all cases – it’s just that a small number who have been in contact about it have remained resistant,” a spokesperson told Poultry World.