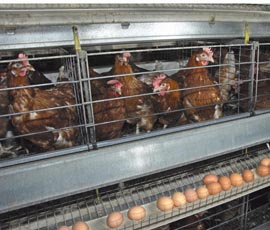 Animal welfare group the RSPCA has launched an attack on egg production in new enriched colony systems, branding them as “cruel” and saying they stop the hens from expressing natural beahviour.

The RSPCA has also started calling the new higher welfare systems “battery cages” and is campaigning to have them banned.

“From January 1 2012, all farmers in the EU will be banned from keeping hens in barren battery cages,” said a statement. “However it will still be perfectly legal to use so-called ‘enriched’ battery cages. The RSPCA has been campaigning to get rid of battery cages for 30 years and will not stop until this happens.”

The comments came as the RSPCA released the findings of recent online research by YouGov, showing the level of misunderstanding amongst the general public about what the new Welfare of Laying Hens Directive will mean in practice.

* 18% assumed all cages would be banned

* 26% believed all hens would have to be free-range

“Some of the wrong answers would be funny if it wasn’t such a serious issue,” said the RSPCA’s senior scientific officer, Alice Clark. “The reality is that a sizeable chunk of the public mistakenly think that hens will no longer be kept in cages and sadly that is not the case.

“The message we want to drive home is that, despite new welfare law, hens will still be kept in cruel cages – if you don’t agree with that make it your new year’s resolution to only buy cage-free eggs.”

It is estimated that about 15 million hens will be kept in cages in the UK next year – 222 million hens across Europe, says the RSPCA.

“Enriched cages give the hens slightly more room, perches, scratching and nesting area. However the hens still have less usable space per bird than an A4 sheet of paper and are not able to properly express some natural behaviours like dustbathing and foraging.

“The RSPCA thinks no hen should be kept in a cage and 61% of the public surveyed agreed, saying they would like to see enriched battery cages banned too.”

* What do you think of the RSPCA’s latest stance. Visit our Poultry Platform forum area.