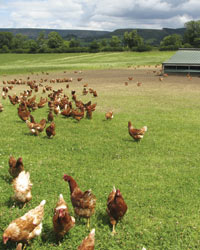 Back in January this year, British Lion Eggs changed its code allowing producers to increase their external stocking density from 1000 to 2000 birds/ha. This is still below the 2500 birds/ha upper limit allowed under the EU marketing regulations.

The British Egg Industry Council explained that its aim was to kick-start the process of bringing more free-range egg production on board to meet the anticipated rise in demand with the approaching 2012 conventional cage ban.

“It means producers limited by land area can have more birds in the same free-range area. It is a quicker process to get planning permission to add buildings to an existing unit than starting from scratch for a new site, so boosting production in the shorter term.”

However, many producers have been unable to take advantage of this change as RSPCA Freedom Food refused to follow suit. It has spent the last nine months reviewing the potential impact on bird welfare, including visits to units in the UK and France already stocked at the higher rate.

After the review, the RSPCA has now accepted the change, but insisted on a number of conditions. These include a requirement that 5% of the total range area should be provided with natural cover and dedicated areas should be provided for behavioural patterns such as perching and dust bathing.

Producers should also develop a range management plan and they should pay further attention to the area immediately outside the pop holes, said the RSPCA.

“Many might be disappointed at the 5% cover, as BFREPA was working hard to achieve 2%. We were particularly concerned for producers on rented land whose right to plant trees may be restricted.

“However, the fact that the RSPCA will allow natural cover to include shrubs will go some way to overcoming the long term problems with tree planting on rented land,” he said.

“We certainly do not want producers to compromise on bird welfare issues. We do not believe the increase in stocking density will adversely affect bird welfare. If we had ever suspected welfare would be affected, we would not have supported the increase.

Mr Retson added that stocking at 2000 birds/ha will not be suitable for all producers because of business and geographical reasons.

“But where it is suitable, it will help overcome the predicted shortage of free range eggs come 2012. Some units could be converted to higher stocking densities without planning permission becoming an issue.”