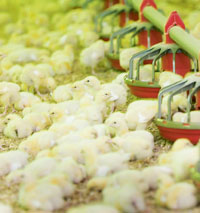 Retail giant Sainsbury’s is extending its initiative to cut greenhouse gas (GHG) emissions, inviting poultry producers to get involved in a project that offers financial, as well as environmental benefits.

The Sainsbury’s carbon initiative has already been running for three years in the dairy sector, using a model developed by AB Sustain – part of Associated British Agriculture.

Milk producers who supply Sainsbury’s are audited for their GHG emissions and then issued with a “traffic light” report, to show if they are in the bottom 25%, the middle 50% or the top 25% in terms of their carbon footprint.

The report also includes detailed technical feedback, with recommendations on how they can cut their emissions and maybe achieve cost savings and efficiency gains in the process.

Talking to Poultry World at the Pig and Poultry Fair at Stoneleigh, AB Sustain consultant Bob Beavan said there were many examples of this in the dairy sector.

For example, some farmers had started rainwater harvesting, others had fitted ice jackets to milk tanks and others had invested in slurry injectors – all of which had helped the bottom line, as well as the environment.

Mr Beavan was optimistic that the poultry sector would achieve similar benefits, particularly when it came to productivity gains and energy cost savings. It could also help differentiate British poultry and eggs from imported products.

The scheme was entirely voluntary and all costs were covered by Sainsbury’s, he added. And any information on the farm’s carbon footprint would be confidential to the farmer and AB Sustain – it would not be passed on to processors, packers or the supermarket.

All the news from Pig and Poultry