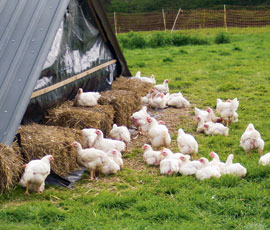 Supplementing layer diets with the right combination of polyunsaturated fatty acids – in particular short chain omega-3 – can lead to a significant reduction in bone breakages during lay.

Researchers at the University of Bristol, funded by the Biotechnology and Biological Sciences Research Council, say the findings could provide a route to maintaining food production while promoting animal welfare.

In their study, the scientists point out that keel bone breakage is a particular problem in free-range systems, with up to an 86% incidence rate. “This problem is made all the more urgent by the imminent ban on cage systems, requiring that 18m birds are ‘transferred’ to non-cage systems, with a potential ‘epidemic’ of broken bones,” they warn.

Given the interest in omega-3 supplementation in human diets to deliver health benefits, the scientists believed similar benefits could be bestowed on chickens.

“Bone fragility and breakages is a problem for both humans and farmed hens, and there is evidence that a balanced omega-3/omega-6 dietary intake reduces signs of osteoporosis.” 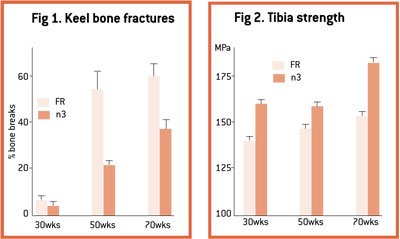 Assessments were made at 30, 50 and 70 weeks of age, with evaluations made for keel bone breakage, bone mineral density of the humerus and the force required to snap the tibia.

The results showed that keel bone fractures in the standard free-range flocks came to 56% at week 50 and 62% at week 70. But in the omega-3 flocks the respective figures came to just 22% and 38%, representing a 40% reduction in bone breakage at end of lay.

The omega-3 flocks also demonstrated higher bone mineral density in the humeri, while the stress required to break the tibia was significantly higher (see graphs).

“In addition to benefits to the chicken, omega-3 fatty acids are also beneficial for human health,” said Michael Toscano, a member of the Bristol research team. “One objective of our research has been to produce an egg with fatty acid content that benefits consumers, while achieving the same bone strengthening effect in the chicken.

“Our next challenge is to find the ideal balance of different fatty acids to maximise the hen’s welfare while producing more nutritious eggs resulting in a positive outcome for chickens, producers and consumers.”

* The research was also carried out with support from the Department or Environment, Food and Rural Affairs, in partnership with Noble Foods.

Free range and organic systems of broiler production have a far higher environmental impact than standard indoor production, researchers at the universities of Nottingham and Newcastle, and Cranfield University have revealed.

In a project funded by several leading poultry companies, organisations and UK government departments, the scientists used a “cradle to grave” approach to assess a variety of impacts.

These included energy use, greenhouse gas emissions, eutrophication and acidification potentials. They then assessed the environmental burden involved in producing 1000kg of poultrymeat from the three different systems.

Animal performance, feed intake, crop production and nutrient dynamics were all accounted for, as were energy use, water use and waste production.

The study revealed that feed production and transport had the greatest overall environmental impacts in broiler production, followed by gas and oil use.

“The length of the production cycle was much higher in free range and organic systems than the standard indoor system and, as a result, the feed consumption per bird was also higher,” the researchers said. “This trend had a major effect on differences in environmental burdens between the systems.” (See table)

In contrast, free-range production scored better in terms of primary energy use, due to the fact that no heating was applied on this farm and natural ventilation was used.

But in terms of eutrophication and acidification, standard indoor production faired much better, again due to the shorter production cycle and therefore lower manure production.

“There were large differences in environmental impacts between egg production systems and generally these reflected the differences in the efficiency in production, feed consumption and material and energy use,” said the paper.