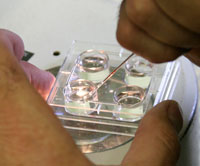 Scientists have developed the first genetically modified (GM) chicken, engineered to prevent the spread of the H5N1 avian influenza virus, and in the process have sparked a renewed debate about the development of biotechnology.

Prof Helen Sang, from the Roslin Institute said she saw the development as a possible boon for farmers in areas where avian influenza is endemic.

Got a view on GM chickens? Why not share it on our Poultry Platform forum debate?

“The results achieved in this study are very encouraging. Using genetic modification to introduce genetic changes that cannot be achieved by animal breeding demonstrates the potential of GM to improve animal welfare in the poultry industry,” she said. “This work could also form the basis for improving economic and food security in many regions of the world where bird flu is a significant problem.”

Peter Bradnock from the British Poultry Council said the development should spark a new debate on the use of biotechnology. “The most important thing is that society will have to decide if it wants this kind of technology taken to all farmed animals. We’d need to have this before farmers could think about taking it up,” he said.

“I’m not talking about consumers in Britain. I’m talking about a broader debate, because this technology could have very important implications for global food resources and reducing the environmental footprint of animals. If you’re keeping animals then you know they are going to survive and not be afflicted by really debilitating diseases which are endemic in some parts of the world.”

Prof Helen Sang agreed that the study could be used a starting point for a debate on the use of biotechnology in poultry production.

“Our research is at an early stage and we want to talk about it so that the public, farmers and everybody else will think about it and see the value, or not, so that this opportunity can be discussed and debated,” she told Poultry World.

But Peter Melchett, Soil Association policy director, blamed intensive farming for the spread of disease within poultry flocks and said GM and biotechnology solutions were not the answer.

“Keeping animals cramped together in inhumane factories encourages the spread of diseases such as bird flu and swine flu. This GM fantasy simply tries to cover up for flawed farming practice,” he said.

“Viruses are some of the most rapidly evolving organisms on earth, and they could rapidly evolve resistance to the GM chickens. In a race to develop new strains, viruses would get there faster than new breeds of GM chickens could be produced. Viruses could even evolve to become more virulent in response to the GM challenge, posing a greater threat to human health.”

“That’s a fair point,” Prof Sang said. “Because that’s what happens with vaccinescertainly there are some genetic modifications you would have to think about using in rotation. You would use them for a while, but not long enough that the virus would overcome them.

“But in the case of the ‘decoy’ we think it would be very hard for the flu virus to overcome it. The sequence we are using is in all eight parts of the flu genome, so all those parts would need to mutate together to avoid our ‘decoy’ molecule.”

Pete Riley of lobby group GM Freeze said practical trials hadn’t yet proved the effectiveness of the new traits, with the cost of birds possibly becoming an issue.

“In intensive units the environment is quite different to the lab, and so far this has not been part of the research. In addition, many poorer producers may find the additional cost of the GM birds too high, and stick with conventionally-bred birds,” Mr Riley said.

“An alternative approach is to move to more extensive and smaller production systems that supply local needs. Genetic diversity in chickens, not genetic modification of a single breed, is important in reducing the spread of infections, as it is with all farm animals.”

From here Professor Sang said that she wants to continue the collaboration with Cambridge University to improve the bird’s ability to resist the virus.

“We want to improve the effectiveness of our ‘decoy’ molecule and hopefully introduce other genes targeting flu so that we have a robustly resistant bird.” she said.

* The study, Suppression of Avian Influenza Transmission in Genetically Modified Chickens, was funded by the Biotechnology and Biological Sciences Research Council (BBSRC), and has been published in the latest issue of the journal Science.

HOW THE SCIENCE WORKS

In their study, the scientists introduced a new gene to a chicken embryo to create a “decoy” module, resembling a primary control section of the bird flu virus. The mechanism which controls the virus’s replication mistakenly recognises the decoy as the actual viral genome, interfering with the replication cycle.

Transgenic chickens bred by the scientists were infected with avian flu and became sick. But, importantly, they did not transmit the infection to other chickens kept in the same pen. This remained the case even if the other chickens in the pen were non-GM birds.

“We expect the decoy to work against all strains of avian influenza and that the virus will find it difficult to evolve to escape the effects of the decoy,” said Dr Laurence Tiley, senior lecturer in molecular virology at the University of Cambridge.

“This is quite different from conventional flu vaccines, which need to be updated in the face of virus evolution, as they tend only to protect against closely matching strains of virus and do not always prevent spread within a flock.”

The technique of using genes to create ‘decoy’ molecules to prevent the spread of viruses is also applicable for other viruses such as Newcastle Disease and with more research Mareks Disease.