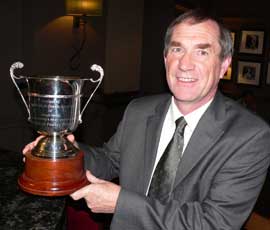 The Poultry Club of Scotland has held its most well-attended annual dinner in recent history, attracting more than 330 members of the British poultry industry to the annual celebration in Dunblane.

At the dinner the annual award for contributing to the Scottish poultry industry, The Howie and Dennis Surgenor Cup, was presented to Kevin Smith, former chief executive of Scottish operations for Grampian Country Chicken.

The award was presented by former chairman of the Poultry Club of Scotland, Malcolm Steven, who returned from Thailand where he now works for Cherry Valley parent company Bangkok Ranch, who lauded Mr Smith’s support for the Scottish poultry industry – “despite being from England”.

Mr Smith worked for Ross Poultry and then joined Grampian Country Chicken and worked his way up from area manager to general manager of agriculture for Scotland.

“At its peak, he was in charge of a business with 130 operational farms producing 60 million broilers a year, supplying six processing plants and consuming a quarter of a million tonnes of poultry feed,” Mr Steven said.

“Wherever I go in the industry, or outside of it, Kevin’s name comes up. Whether it be former colleagues or suppliers, the same words are used – a gentleman, an honest guy, a straight guy, his word is his bond.”

Mr Smith said he was very surprised and honoured to receive the award. “I just did the job.”

Attendees at the dinner also heard from Poultry Club of Scotland chairman, Karen Campbell, that long-time conveynor Dennis Surgenor has stepped down after more than three decades in the role.