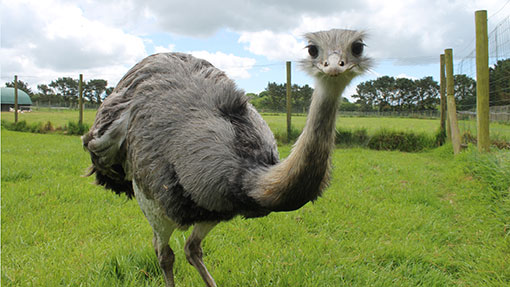 Affectionately known as “the zoo”, Clarence Court’s Tremayne Farm in Cornwall is home to a wide diversity of seasonal poultry species, as Philip Clarke finds out.

Four years ago, top-end retailer Waitrose issued its key supplier Stonegate a challenge – to come up with one new seasonal egg product every year for the next six years.

To date the company has hit that target, kicking off with goose eggs and extending the range to include rhea, pheasant and Guinea fowl eggs – all produced and marketed through its upmarket subsidiary Clarence Court, based in Cornwall.

“The volumes are small and they don’t make much profit,” concedes Stonegate’s marketing director Chris Moreman. “But they do fulfil a niche in the market, appealing to customers who have a special occasion to celebrate or like something a bit different – and they definitely add a bit of retail theatre.”

Predicting supply can be tricky, but fortunately Waitrose – the principle customer for Clarence Court eggs – understands the issues of free-range birds that seemingly come into lay when they want to and show huge variability in the number of eggs produced each season.

But by the same token, demand can fluctuate, too. “If there is a particular TV programme featuring say, goose eggs or Guinea fowl, we can see a real spike in demand which we have to try and meet,” says Mr Moreman. “There has to be a lot of give and take.”

So what is involved in producing seasonal eggs? 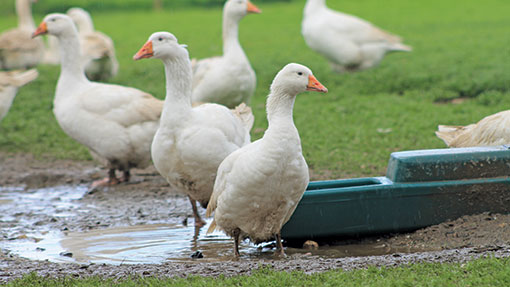 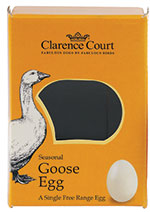 There are about 100 Embden and Legarth geese in “full-time” production at Tremayne – though they are actually only laying for about four or five months of the year.

Generally, they come into lay in late February or early March, depending on the harshness of the winter, and carry on laying pretty much every other day until the end of June or early July. Last season the flock averaged 42 eggs a bird, giving a total of 4,200 eggs to sell.

The birds are outside all day, grazing, but are driven into wooden sheds at 5pm, to make sure they get a proper meal before settling down for the night. The ration is a duck layer pellet of 14% protein, GM-free, devised by the company’s own nutritionist.

“Once they have finished laying, they are allowed to stay out at night,” says laying farm manager Geoff Barnes. Foxes can be a problem, but a local marksman is used to keep numbers under control.

As well as the laying flock, the farm has 150 female geese in rear, lined up as replacements. They are kept in a barn, vaccinated for salmonella and fed ad-lib to help build their frames. Water is provided in a trough, allowing them to preen as well as drink.

At about six weeks, they are given access to a small grazing paddock. These birds will come into lay next spring, but their eggs will be small, so Clarence Court will have to find another market for them until the following year, when they can join the main flock.

Marketing and packaging is a key aspect of Clarence Court’s seasonal egg production. As well as Waitrose, they also go on sale in places like Harrods, Selfridges and Fortnum & Mason. The eggs are hand packed in individual, orange boxes, with cooking advice on the side.

Each egg sells for £6.99, which seems a high price to pay for “something a bit different”. But as Mr Moreman points out, the birds have to be maintained for 12 months of the year, and replacements reared, even though they only lay for four months. “There are cheaper goose eggs out there, but they will have come from a barn goose,” he suggests.

Demand for goose eggs is growing and the company is aiming for 10% market expansion a year. 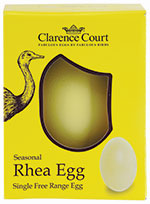 The “flock” of rhea at Tremayne comprises just three birds – and one of them is male. Egg production is limited.

The laying season is about the same as for geese, with the females coming into lay in March and continuing to lay to the end of July – give or take a month at either end. They generally lay one egg every three days, so can produce up to 60 eggs a year. “But not all of those eggs will be suitable for sale,” says Mr Barnes. “Last year I had about 35 eggs from each bird. Temperature and day length have a big effect on egg consistency.”

Managing the rhea, which originate in South America and are from the three-toed ratite family, has its own challenges. While they are placid during the off season, once the females are in lay, the male can be quite aggressive. “He tends to flare up, but he does not kick like an ostrich would.”

The male bird makes the nest and the females lay in it. But it is the male that sits. Obviously there is a chance that some of the eggs will be fertile, but they are removed daily, so there is no chance of anything developing.

Fencing is made of large mesh wire netting, with a top strand at about 6ft high – more than enough to keep the flightless birds contained. They have a large paddock to roam and generally look after themselves, eating grass during the day and putting themselves away at night.

The diet is supplemented by the same duck pellets as the other birds on the farm get, plus flaked maize for extra energy.

Given their scarcity value, rhea eggs command quite a price, fetching £25 each. But you do get a lot of egg for your money – the equivalent of 10 hens’ eggs. The information on each box describes the rhea egg as “an oval delight”, being lighter and fluffier than a hen’s egg, with a stronger flavour.

Soft boiling takes about 30 minutes, but hard boiling needs over an hour. Apparently they are “great for sharing with crudités” and the shell is “ideal for carving or decorating”. 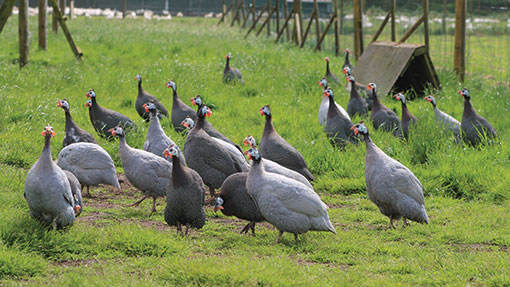 About 80 female pheasants were bought as poults last August and overwintered, before coming into production in April.

“There are so many pheasants bred in this country for shooting, there is no need for us to rear our own,” says rearing farm manager David Macdonald. “We just buy what

While coccidiosis can be a problem in commercial pheasant production, the low stocking rates and remote location in Cornwall mean disease is not a problem for any of the seasonal species at Tremayne.

The pheasants are kept in a long enclosure, with netting over the top. While they get on fine together during the winter months, the birds are temperamental once they come into lay and can be aggressive towards each other.

They typically lay 50 or 60 eggs each in two batches, with a break in the middle. The greatest management challenge is finding and collecting those eggs. “They are not a communal bird and, while we provide housing with nest boxes, most prefer to lay in the long grass.”

Tremayne Poultry Farm has had a chequered history. Originally set up as a conventional cage egg and rearing unit in 1972, it was converted to barn egg and floor rearing in the 1990s. But once that trade declined, it was changed again, becoming the company’s alternative breeds free-range production centre.

Quite what the company will add to its menagerie next year remains to be seen.

As such, the farm staff have to walk the enclosure twice a day. “We soon learn where they are,” says Mr Barnes. “We always leave one egg in each nest to encourage further laying.”

The farm produces about 400 pheasant eggs a week, some of which are put into boxes of four for retail. These boxes are then sent to the main Stonegate packing centre at Lacock in Wiltshire for date stamping and distribution. They are selling in Waitrose for £3.99/box.

The bigger demand, however, is from the restaurant trade, where pheasant eggs make a tasty, alternative ingredient.

The farm also plays host to a small flock of 50 Guinea fowl. Kept in runs adjacent to the pheasants, they are provided with perches and shelters, as well as long grass for ranging in, and are fed the same duck pellets as the other birds on the farm.

The Guinea fowl tend to start laying a bit later than the geese and rhea, getting going in April and May, and keeping going until late summer. The season is longer, but they still only produce about 50 or 60 eggs a bird. But at least they tend to lay in the nest boxes provided, despite their flighty reputation.