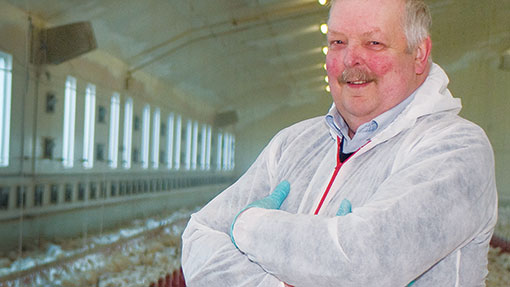 Developed originally by Prof Steve Collett of Georgia State University in the USA, the system takes the form of an integrated package of on-farm measures designed to balance the pH of the bird’s intestinal tract and create an environment in which beneficial microflora can thrive.

“It is all about promoting natural bird health. In the past, antibiotics have been used to suppress harmful organisms. Now we are turning the problem on its head and developing and nurturing beneficial intestinal flora to help birds stay healthy.”

The system, which is delivered through a collaboration of Alltech UK, St David’s Poultry Veterinary Team and water specialists LMS, has been used at Toux Farm for several crops.

“We were having to use antibiotics of some description for almost every batch, and still weren’t getting the results,” says owner Mr Western. “We’d post-mortem chickens in our on-site lab to find out what the diseases were, to be ready with the right antibiotic.

“We came to the conclusion that everything starts and finishes in the gut, so we started talking to Alltech about seed, feed and weed. I felt that this was a better way forward, to be proactive and get gut health right.”

According to John Cooper, director of poultry solutions at Alltech UK, the seed feed and weed concept was designed with the aim of going antibiotic free.

“In the long run, we know this is achievable: several flocks in the USA are already successfully operating in this way,” he says. “We will never be able to eliminate antibiotic usage entirely, of course, in that they will always be used when necessary, but we can reduce their overall use.

“At the moment, what seed, feed and weed is achieving for most producers is reduced antibiotic usage and the ability to manage that usage more closely. It is one part in a complex production system that supports the reduction of antibiotic usage in the future.”

Having completed four crops at Toux Farm, the results so far have exceeded all expectations.

“Finished weights are up across the board, by over 6% in both houses,” says Mr Western, who takes day-old chicks and finishes them, on average, at just under 37.5 days for 2 Sisters Food Group. “We are more confident of our results and the job is easier. Not having to worry about birds being ill takes a lot of stress out of it.

“The important thing is that seed, feed and weed has not meant more expense and less income. A net margin rise of over 20%, and improved EPEF, which takes growth, feed conversion and mortality into account, is not to be argued with, and the programme is straightforward to operate.

“We do work closely with our vets – Andrew Millar of Ardene House, Aberdeen and Sara Perez of Minster Vets in York – sending weekly reports, graphs of feed and water consumption, bird weights and mortalities. All our figures are in line with the trials undertaken by Alltech and the St David’s Poultry Team.”

Chicks are given “seed” probiotics in water for their first three days at Toux Farm.

“Talking to Prof Collett taught me how important it is to use the correct probiotics,” says Mr Western. “The lactobacillus bacteria must have its original gene stock directly linked to chicken to be readily recognised and accepted.”

Before adding the “feed” organic acids, the farm’s water has to be analysed so that the right mix can be added using a simple pump system. “We use a Select pump, which constantly measures the water flow and injects the exact amount of acid required. We have to keep the pH level of water at the correct level,” emphasises Mr Western. “We are running at 5.5 – any lower and you risk damaging drinking equipment. I always thought our water here was clean, now it’s 110% clean.”

The “weed” supplement is a selected strain yeast extract. “It’s natural and easy to apply,” says Mr Western. “As it runs through the gut, the bad bacteria sticks to it like metal to a magnet and goes out with the faeces. It’s not expensive. I opted to install the equipment to add the in-feed supplement myself on farm – rather than having it added at the feed mill. It cost less than £1,000 to get up and running.”

Seed, feed and weed is tailored to each farm and all elements of the programme must be followed.

“In my first batch, I freely admit that I did my own version of the programme using the organic acids and chlorine, and the in-feed supplement to weed out the harmful bacteria, but only for part of the batch,” admits Mr Western. “It resulted in us still having to use antibiotics and no financial benefit. After that, I followed the whole programme to the letter, and the results have been remarkable.

“The programme not only gives us more confidence to invest, but it has hopefully given our processor added confidence in us, that Toux can produce sound, reliable, quality birds, year in, year out – and without continual recourse to antibiotics.

“The whole approach is something that, as a poultry farmer, I just can’t afford to ignore. Concerns about antibiotics are only going to get bigger, and sooner rather than later the integrators or the government will say you can’t use them.

“There may always be farmers who want to use them, but I would much rather try to achieve healthy birds and profitable production in other ways – and seed, feed and weed does it for me.”


What is seed, feed and weed

Seed – Seeding involves feeding the chick with probiotics, ideally at the hatchery, to populate its intestines with the “right kind” of microflora that will go on to colonise the gut and help support the digestion of feed.

Feed – Feeding helps these gut microflora to establish and dominate the intestines. This is done by adding a mixture of organic acids into the chicken’s drinking water, taking care to achieve the right pH. Chlorine is also added for a good bacterial kill and to prevent a build-up of biofilm in the water-lines.

Weed – The process is completed by adding in-feed supplements to the feed of chicken to weed out harmful pathogens in the gut. These can include Actigen, a natural yeast derivative which together with other gut health products is fed in the form of Alltech Powertract. By binding and clearing unwanted pathogens from the gut, they allow more space for the good bugs to thrive – thereby promoting gut health – which has resulted in improved productivity.