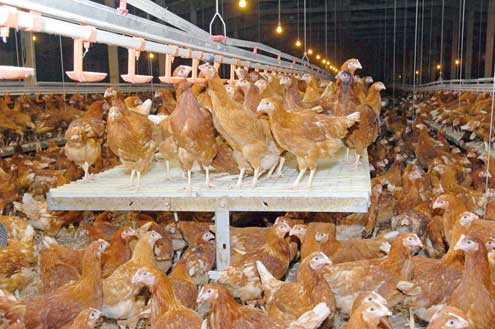 One of the surprising findings for pullet rearers from a recent series of DEFRA-funded workshops was that birds in rear do perform injurious pecking.

It rarely causes noticeable plumage damage, but it often persists into the laying period, and can be associated with higher levels of damage then. So, it is an important behaviour to look out for and to try and reduce.

Fortunately there are management techniques, often simple and inexpensive, that rearers can use to help reduce the likelihood of injurious pecking as the birds move through to the laying flock.

As part of the University of Bristol’s animal welfare research team, Claire Weeks and Sarah Lamberton have described a number of “easy wins” for reducing feather pecking, such as the provision of perches at an appropriate height and good quality, friable litter for floor-reared pullets.

These are already commonplace within the UK pullet rearing sector.

Some of their other suggestions, however, could be more challenging for existing pullet rearers to implement in practice, but none of them would add significantly to the pullet rearing costs.

For example, placing breeze blocks on the raised areas used in rear for birds to peck and scratch at, and the provision of hanging bunches of string were considered to be very cost-effective ways of reducing injurious pecking.

Experiments have also indicated that scattering small quantities of whole grain on litter during rear increased ground pecking by the pullets and reduced feather pecking and, at the same time, helped keep the litter friable.

Studies have also shown that non beak-trimmed birds that have access to ranging areas from eight weeks of age are less prone to injurious pecking by the time they come into lay. But if rearers have insufficient land adjacent to their rearing accommodation to allow birds to range, a compromise solution may be to attach verandas to the sheds.

Housing pullets at lower stocking densities – for example under 10 birds per square metre – also appears to be beneficial in reducing injurious pecking.

Stressful events are known to influence levels of pecking, so it is vital to minimise the number of these events, especially when birds are being transferred from their rearing to laying accommodation. In this context, it is important that conditions in rear match those to be found on the laying farm as closely as possible.

Fewer problems are found where there is a match of feeding and drinker types, lighting patterns and housing structures, for example, and this leads to improvements in feather cover and productivity.

Good communication between rearers and customers is therefore an important factor in making sure that the transition is managed to minimise stress and ensure productivity.

It is also important for producers to work closely with specialists if they want to move to rearing flocks without the need to beak trim.

A second round of funding will shortly be coming available to help producers, both in rearing and in lay, to implement management strategies to reduce injurious pecking through the Farming and Forestry Improvement Scheme. Further information can be found at http://rdpenetwork.defra.gov.uk

John Newton is a senior poultry consultant with ADAS working throughout the country.

The workshops were aimed at pullet rearers to help them to prepare for the proposed ban on beak trimming in 2016 and to discuss whether birds can be reared without the need to beak trim.

While this is no easy task, there was a genuine willingness from rearers to adopt some of suggested management techniques on their farms. The workshops were hosted by the major pullet rearing companies in the UK. Attendees also heard from either Stephen Edge of ADAS or Stephen Lister of Crowshall Veterinary Services about the current legal position regarding beak trimming, and the government’s commitment to review the evidence in 2015, with a view to banning beak trimming in laying hens in 2016.

Mr Edge and Mr Lister are both members of the Beak Trimming Action Group that is tasked with trying to find ways to ensure that, if a ban is implemented, the welfare of hens is not compromised.

DEFRA is looking to fund a pilot study to help communicate best practice across the whole industry to reduce injurious pecking and to implement management strategies for untrimmed flocks of birds. This will feed into the evidence review in 2015.