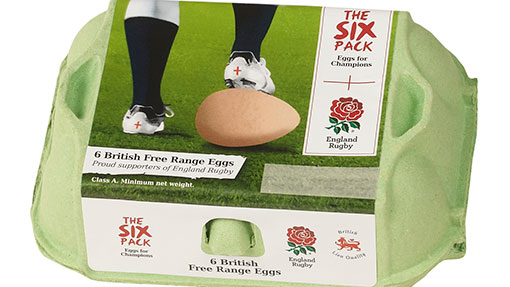 Egg producer/packer Stonegate Farmers has teamed up with the Rugby Football Union to launch its new Six Pack branded eggs, to coincide with the ongoing Six Nations rugby tournament.

“As one of the market leaders in egg supply in the UK, we are delighted to sign this unique partnership with the RFU, one of the UK’s largest sporting brands,” said Stonegate’s sales and marketing director, Chris Moreman.

“The England team has a huge following worldwide, with millions tuning in to televisions around the globe and of course the 82,000 fans watching the games at Twickenham. Our partnership will increase Stonegate’s brand awareness and generate sales.”

The deal also extends into next year, taking in the eighth rugby World Cup.

Jane Barron, licensing manager at the RFU, pointed to the “fantastic opportunity for sport and retail to work in partnership” as the entire World Cup is played on English soil for the first time in 25 years.

More on this Moy Park to sponsor football world cup