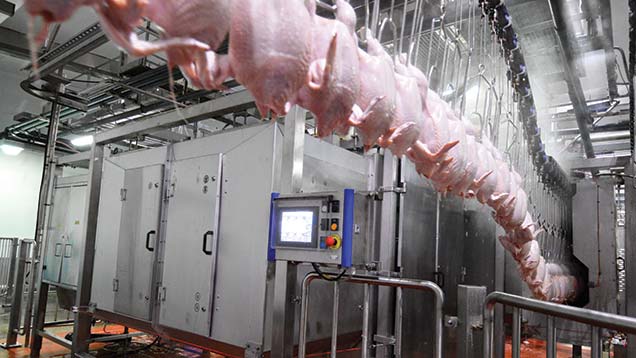 Poultry integrator Faccenda has reached a “key milestone” in its work in reducing campylobacter – a slaughterhouse intervention that is commercially viable and creates a meaningful reduction.

It has been trialling a Sono Steam machine, which sits on one of the kill lines at its main plant in Brackley, Northamptonshire, since the beginning of this year. The technology blasts birds passing through with a combination of ultrasound, which disrupts a film of water that covers skin while submerging the carcass with steam.

The effect is enough heat to kill much of any campylobacter present while leaving the birds’ skin with the same appearance.

Faccenda managing director Andy Dawkins says he is confident the system will form part of usual killing at the slaughterhouse by early summer – and that it will make a significant contribution to gaining a 1 log (tenfold) reduction in campylobacter levels.

Ultrasound is, quite simply, noise that is a higher frequency than humans can hear. It has applications across industries, from mining to medical care, but only recently has it been applied to food hygiene.

The company first experimented with the concept in partnership with a Danish integrator, and a working prototype was developed. But it was not implemented. Technical director at Faccenda David Keebles heard of some reports and flew over to find out more.

“We found some good common ground and set out to pilot plant work in Denmark.” It necessitated frequent return trips to monitor trials and even, at later stages of trials, couriering British birds over to the company. “That became complicated and expensive, and however we did it, we were testing chickens that had been chilled for 24-48hrs.”

So the decision was made to install the system at Brackley. “In parallel, we did a lot of work on rapid surface chilling, and we still believe that there is potential in this technology.”

But the decision was made to commit to Sono Steam. And by December 2014 it was in line and ready to be tested.

The unit comprises a “tunnel”, which birds pass through, lined with so-called “whistles” – nozzles designed to spray steam at high pressure. Cleverly, they are calibrated in such a way that the steam passing through generates the ultrasound.

The reason for the ultrasound is that it cuts the treatment time to just 1.5sec, meaning that steam has little chance to denature the skin or cause any damage, but it is a process that must be finely tuned.

Getting the balance right between the sound frequency and steam temperature has been the balancing act necessitating the trials. It was also a challenge to install – a wall had to be moved and the weight of the unit threw the delicate kill lines out of kilter temporarily.

Another balancing act is getting the best bacterial reduction without denaturing the skin.

This has necessitated six-hour trial runs on birds each week since Christmas, and there has been steady improvement. Faccenda is now extending the duration of these with a view to having one of the kill lines at Brackley continuously using Sono Steam by the end of June.

A final consideration is consumer perception. The company will undertake an independent survey of 400 consumers to check the appearance of the birds is acceptable. While the treatment causes a slight discolouration, they are confident it will not prove a deterrent to buying treated birds.

Before birds reach the Sono Steam factory intervention, they will have been subject to a rigorous testing regime that aims to identify patterns and possible pinch points.

“Every farm, every shed, every cycle, we test prior to first depletion and test again at clearance,” says Mr Keeble. The business is building up a database that will say when, how and what happened to each flock.

“We want to use the numbers to help our farm managers with what they should do,” adds Mr Dawkins. Campylobacter is “undoubtedly allowing us to raise the profile of good biosecurity, and drive good habits at farm level,” he says.

Although the business has tightened up biosecurity, thinning and depletion, he is slightly reticent about the impact biosecurity will have. “We don’t believe alone it will solve the problem.”

The company uses in-house catching teams, paid by the hour, and it forms part of a focus across Faccenda on paying people well to do a job properly. There are no long-term agency workers, no zero-hour contracts, and every member of staff is paid above minimum wage.