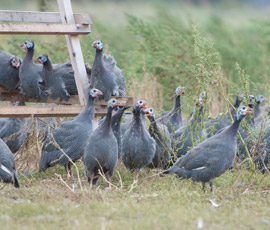 Speciality birds, such as wild guinea fowl and poussin, have become the fastest growing meat on sale in the UK as more consumers seek roast dinner alternatives.

According to leading supermarket group Tesco, demand for speciality poultry has doubled in the last six months, prompting the chain to increase availability from 200 to 350 stores across Britain.

Sales peak from the end of November through to the New Year, with the highest demand coming in Christmas week itself, driven by the increasing use of game in recipes used by celebrity chefs.

“Wild bird had a reputation of being a meat that was the sole preserve of the country set, but now this succulent and healthy food is finding favour with a growing number of Brits wanting something different for their roast dinners,” said Tesco speciality poultry buyer Nick Hall.

“While more adventurous Brits are buying wild bird like guinea fowl, pheasant and partridge, as well as goose, others are buying poussin.

“Even just five years ago we would only have sold these birds in a handful of stores, predominantly in countryside towns. But now we are seeing strong and growing sales in more urban areas.”

* To read more about Guinea fowl, see our special feature

Guinea fowl – tastes like a cross between chicken and pheasant and is a very lean meat, low in calories with good nutritional value

Partridge – a medium-sized bird which has a subtle, delicate taste similar to chicken, but with a stronger, gamier flavor

Pheasant – also similar in taste to chicken, but is more succulent with a richer, more intense flavor