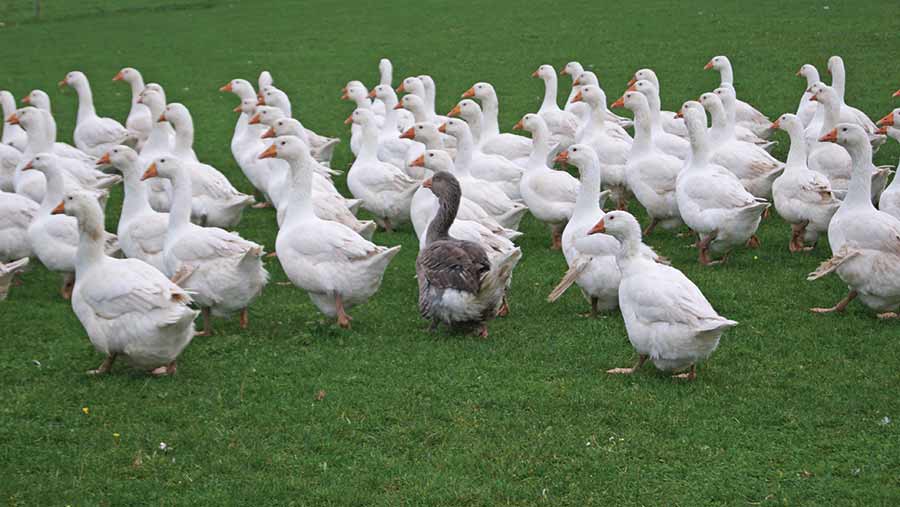 Think of a type of poultry, and the chances are you’ll be able to find it at Richard Jones’s Hyden Farm, a few miles to the north of Portsmouth.

The focus is very much on quality, producing a premium product for the more discerning customer who is prepared to pay more for something a bit different.

Mr Jones arrived at the tenanted Hyden Farm in the 1980s and, from the outset, his vision was to rear a complete range of meats using traditional breeds, rather than producing for the mass market.

This included cattle, sheep and pigs, along with the poultry.

The rise of farmers’ markets in the 1990s provided a particular opportunity to build up the business, selling direct to top-end consumers.

But the demise of farmers’ markets since the recession in 2008, combined with a recent decision by his landlord to take a significant chunk of the farm back in hand, means the focus is now very much on poultry.

Mr Jones has used the French Sasso breed of chicken since 1999.

Created in the 1970s, this slow-growing breed is particularly suited to free-range and organic production, and accounts for about 80% of the traditional free-range market.

All poultry are reared to 16-18 weeks old, resulting in larger, tastier and more mature birds that can weigh up to 2kg. The birds are all killed on the farm, then hung for a few days to mature, before being processed.

Mr Jones says he likes the way French consumers still value how their food is produced.

“It is a shame that the British poultry industry has gone down the intensification route, but really interesting to see how the French have maintained a real interest in the quality of their food,” he says.

Guinea fowl keets also come in at day-old from S&T Poultry, and are reared to 16-18 weeks to give a slaughter weight of 1.5-2kg. Prices range from £9/kg for a whole bird to £13.20/kg for a Guinea fowl casserole.

While the chickens are reared year-round, the turkeys are targeted at the Christmas market.

Mr Jones has reared about 200 this year – a mix of Kelly Bronze and traditional Norfolk Blacks from Peeles. The birds arrived in June and were reared indoors in a Dutch barn-type building for a month before being let outdoors.

The turkeys are fed non-GM foods, with no fishmeal in the diet.

Slaughtering takes place on farm in a low-throughput abattoir at the beginning of December, with the birds hung for two weeks in a chiller room.

They are sold from the farm, plus two other farm shops.

“It is very important when you are producing quality meat that you know your customer,” says Mr Jones.

“I will only rear what I know our customers want. People will spend a lot more on a quality bird at Christmas, but will be so much more selective and price-conscious at other times of the year,” he says.

Aylesbury hybrid ducks are also purchased from S&T Poultry and Mr Jones is proud that his birds form the 1% nationally that are not slaughtered before first moult.

“From 53 days, the birds get covered in stubs and it gets really difficult to defeather them, but we still take them through to 14-18 weeks.”

The Aylesbury’s sell from £9.50/kg and the family also keeps Muscovy ducks along with Indian Runners for eggs and as a small, two portion duck.

The Indian Runner eggs are sold through First Choice, which has been based in Covent Garden since 2001, targeting the high-end hotel and restaurant market in London.

The farm’s geese are bought from John Burns, Cullompton, Devon, who runs the fully organic Middle Whitecleave Farm. “His Embden hybrids are consistently among the best geese in terms of temperament, quality and fattening ability – really excellent.” Birds are reared to 3-7kg and sell at £14/kg.

The family runs two main sheds – rearing birds for a month before turn out and resting the other. While foxes are a consistent problem, with vixens particularly rife in the spring, electric fencing keeps them at bay.

The family loves having schools out to view their mixed farm and strongly believes that informing the next generation about the importance of food production and sustainability is vital.

Open days and farm walks are also held and provide an opportunity to see a traditional mixed farm.