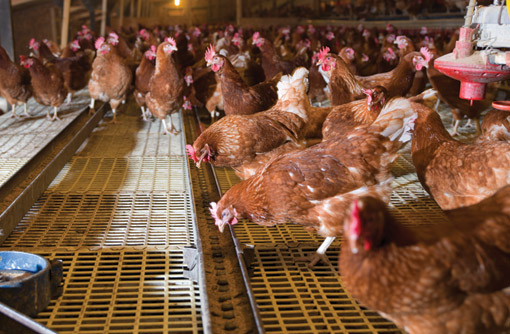 It’s an established fact that, as geneticists squeeze ever-better performance from birds, management must get more precise.

This means measuring figures down to the third decimal point, or adjusting shed temperatures by fractions. Feed is also increasingly technical, mixing a complex range of nutrients and vitamins to optimise egg production.

Perhaps the next step is splitting nutrient delivery down to the period when a bird can use it best. The team at Nutreco, an animal nutrition company, has been trialing seven-hour split-feeding programmes, which can now be applied practically to commercial egg farms through Frank Wright Trouw Nutrition International, its UK subsidiary.

Results of these trials have shown an improvement in shell quality and end-of-lay performance, as well as better nutrient absorption.

In the daily cycle of production, the majority of eggs are laid in the morning. About 30 minutes later, ovulation starts and the next egg begins its journey. The first stage is formation of the albumen, which takes around four hours, and then the shell develops over the following 20 hours or so.

As the egg is laid and the next day’s begins to form, the bird needs more energy and protein, both to fuel the effort to expel the egg, and to get another under way.

Bumping up calcium as well as other nutrient levels later in the day will support the production of shell around the albumen and splitting feed means that nutrients can be tailored to the time of day the bird needs them.

The amount of feed delivered to birds can also be rationed more accurately to match natural eating habits – typically 40% in the morning, and about 60% later in the afternoon by volume.

Frank Wright has been working closely on the split-feeding concept with feed nutrition company Harbro, which has exclusive distribution rights for the home mixing market within the UK.

“The system is ideal for home mixers looking to further reduce feed costs and improve shell quality,” says Harbro poultry specialist Doug Steele. “We now have a number of customers using this system and experience of how it works on a commercial unit. I can only see the number of units on this system increasing.”

Interested producers can find out more about split feeding by contacting either company.

The research and development team at Nutreco has been working since 2005 on this idea, to determine the effect of different energy, protein, phosphorus and calcium provision for layers at different times of day.

Researchers found that energy and protein could be cut in the afternoon, with no adverse effect on performance and a slight improvement in feed conversion.

A separate study into calcium intake found that the levels included in the morning ration could be almost halved. As long as it was increased in the afternoon’s feed there would be no negative effect on egg production or quality, but in fact fewer seconds and better shell quality.

Reducing calcium in the mornings has a second benefit: calcium inhibits the digestion of phosphorus. So feeding less calcium means phosphorus can be reduced in the morning ration without any impact on egg quality, but a knock-on improvement in feed conversion ratio (FCR).

When the findings of these results were combined into a single trial, egg weight was improved by 0.09g average and shell thickness by 0.004mm. The shell weight per unit of surface area (SWUSA) also increased by 0.8mg/sq cm compared with the control flock.

A second trial examined the effect of changing to a split feeding system. An older flock was fed a single feed in weeks 91-94 of lay, and switched to a split diet in the next four weeks. Saleable eggs in the second period jumped from 66.74% to 69.26%, although total eggs produced dropped slightly.

The nutrient content of faeces was also demonstrated to be lower, with less nitrogen, phosphorus and calcium. “These results are explained by a lower daily nutrient intake and a better utilisation of those nutrients,” explains the report.

Roger Farley, senior product manager for poultry at Frank Wright Trouw, is first to admit that this arrangement would not suit everybody.

He says that the ideal farmer to try split feeding is probably one looking to fine tune output. Those with room for improvement in other management areas, such as biosecurity, would be better to tackle those first before committing to split feeding, he advises.

He is also keen to stress that each farm needs a slightly different split feeding formula, and at this stage a bespoke approach is recommended.

Despite this, Mr Farley believes that the uptake of split feeding will grow as producers seek out more precise ways to keep improving performance and margins.

Keep up with the latest poultry industry news