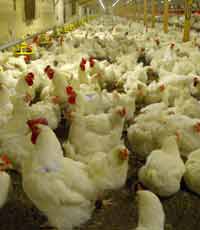 Stressed birds are more susceptible to becoming infected with the food poisoning causing bacteria campylobacter than calm ones.

This is according to results presented by an University of Bristol researcher at the Society for Applied Microbiology’s summer conference in Manchester earlier this week.

Led by Tom Humphrey of the university’s Department of Clinical Veterinary Science, the project in collaboration with the UK poultry industry examined the behaviour of campylobacter in chickens, of which there are approximately 400,000 cases of campylobacter food poisoning in the UK each year.

Prof Humphrey highlighted that studies on bacteria like campylobacter are traditionally carried out in conditions which may not reflect the production environment.

Research in many countries has shown that after transport, levels of bacteria like campylobacter are higher in the gut of food animals than on the farm.

He added: “Work at Bristol has demonstrated that this may be associated with the release of the stress hormone noradrenalin. This hormone makes campylobacter grow more quickly, become highly motile and invasive, leading to an increase in its ability to cause disease – its virulence.”

A further finding is that campylobacter can interact with other organisms in the bird’s gut. “When this happens it can become even more infective.”

The results of this study provide vital information to enable the control of infection in the production environment, making chicken safer and decreasing cases of food poisoning.

Prof Humphrey added that the UK poultry industry is already working hard to control campylobacter and that these results will help advance scientific knowledge on the organism.