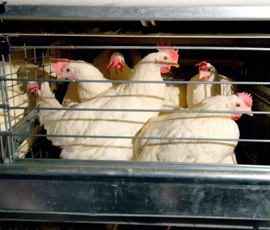 A new survey has found that 71% of voters support plans to establish national standards for the treatment of egg-laying hens, while only 22% are opposed and 7% are undecided.

The new bill, which has been promoted jointly by the Humane Society of the United States and United Egg Producers, is working its way through the US Congress in Washington. It would effectively double the amount of space per bird and provide perches, nesting boxes and other forms of environmental enrichment.

It would also prohibit excessive levels of ammonia in henhouses, ban inhumane methods of euthanasia and require a national labeling program so consumers have more information about the conditions in which hens are raised.

“The Humane Society of the United States and the United Egg Producers have been long-time adversaries, but have come together and identified a solution that balances animal welfare and the economic realities of the industry,” said HSUS president Wayne Pacelle. “The nation needs this kind of problem solving.”

The survey of 804 voters was conducted by Saperstein Associates during 13-18 March. There are almost 28m laying hens in Ohio.