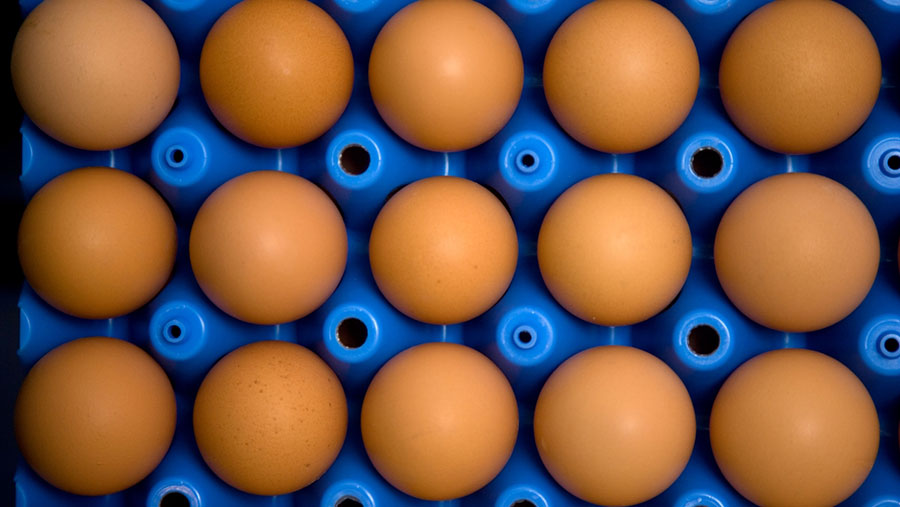 Britain’s egg producers are facing their worst financial crisis for up to 30 years as retailers hold farmgate prices well below the cost of production, farmers and industry experts have warned.

Egg buyers from the 10 largest retailers came in for heavy criticism this week after refusing to face angry farmers at the Pig and Poultry Fair (10 May) and explain why they are driving them into the red.

Independent costing data from Adas reveals that producers are typically losing 23.8p/doz before finance and 41.2p/doz with finance costs included.

See also: Egg producers ‘on the brink’ as 30% cost rise wipes out profits

He said it was shaping up to be the worst crisis producers had faced since Edwina Currie, then a junior health minister, infamously brought the industry to its knees in the 1980s over claims the national flock was infested with salmonella.

Sainsburys, Asda, Aldi and Marks & Spencer had not responded to Bfrepa correspondence sent since the middle of February, Mr Gooch said, while Lidl and Waitrose had responded to letters but did not engage in “constructive dialogue”.

Tesco and Morrisons called for private meetings, and do offer contracts that track the cost of feed, although one of Tesco’s national packers had used it for their production but chosen not to pass the help on to farmers, behaviour which Mr Gooch described as “criminal”.

Morrison’s feed tracker tops out at £290/t, but they have made special payments to farmers on top of that.

More help has not been forthcoming from retailers as they are engaged in a fierce battle for market share and are under enormous pressure to help with the cost of living crisis, but Mr Gooch said this short-term behaviour would lead to the return of a painful boom and bust cycle in the sector.

“There is going to be a shortage,” he predicted. “The question is whether it will be at Christmas or halfway through next year.”

This is despite some modest declines from peak consumption in 2020 as consumers scaled back home baking as lockdown measures eased.

More than 70% of respondents to a recent survey by Bfrepa said they would leave egg production within a year if a price rise was not forthcoming.

Some 60% of the UK’s 39 million birds are free range, with the flock size already having shrunk from a peak of 44 million birds in 2020 – including a cull of 1.5 million during last winter’s avian flu outbreak.

The egg sector has so far failed to replicate the success of the dairy industry in compelling retailers to pass on to the consumer some of the inflation-linked increases in cost of production.

This was partly because of egg producers’ “medieval” supply contracts, said Mr Gooch, which compelled farmers to rely too much on the goodwill of packers to pay them a reasonable price.

He called on Defra to conduct a review of the supply chain, similar to those seen in other farm sectors, and for more of the egg industry to switch to a dairy-style aligned contract model which tracked costs.

Some farmers at the meeting also called for consolidation in the packing sector, with about 40 firms currently sitting between producers and retailers, up from six 30 years ago.

Suffolk egg producer Daniel Brown said the abundance of packers was helping to keep prices down, as if one declined to sell at a low price, there was always another willing to step in.

“It is the systematic destruction of family farms by the supply chain,” he said.

“Some day we’ve got to wake up and realise that, unless there is actually a farmer to produce an egg, a packer won’t have a business to pack eggs.

“We now have to look at vertical integration. If we are putting chicks down now, we need to make sure we’ve got a market for those, not for Christmas, not for Easter, but the following Christmas as well.”

Somerset farmer Jeremy Walker said: “The only way we will get a supermarket to respond is to cut supply. Let’s starve the buggers into submission!”