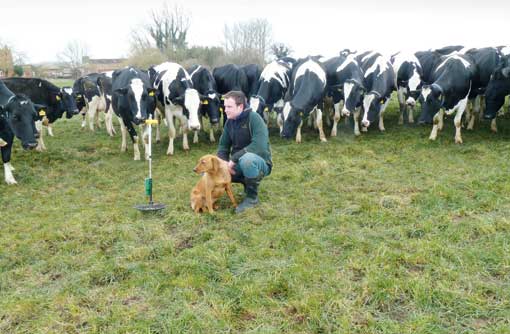 Changing your business to a more profitable one doesn’t necessarily mean expansion and more cows, according to Norfolk dairy farmer Ben Walker.

Over the past year, Mr Walker has undertaken a complete system change and moved to a grass-based autumn block-calving herd to make the best use of the East Anglian climate.

He explains that prior to the overhaul, the business – which is made up of an arable and dairy enterprise – was producing a lot of milk, but no money.

When he returned home in 2011, after a year working on farms in Australia and New Zealand, the herd of 150 Holsteins – which he farms with Jack and Jeannie Salter, his parents Ian and Sue and brother Tim – was yielding about 11,200 litres.

“We had reached a point where we knew something had to be done about the lack of profitability,” he says.

“We had to justify every acre of land the dairy enterprise was taking away from the arable side, and with an attractive range of farm buildings on the side of a main road into nearby Norwich, diversification was a real option.”

The dairy herd was constrained by the layout in the buildings and although the family looked at expanding herd numbers and putting in a new unit, the numbers didn’t stack up.

“The idea of spending a huge amount to find ourselves just multiplying the problems we had already didn’t make sense,” says Mr Walker.

“We had a high level of mastitis, huge vet bills and large feed and labour bills. Milkbench+ figures showed feed costs at 7.71p/litre and vet costs at 1.33p/litre. Our straw bill alone was more than £50,000 a year, but we couldn’t justify the expense of updating our buildings and putting in cubicles.

“I felt the high-yielding Holsteins were on a knife edge the whole time,” he says.

Ben and Ian knew they needed to change the dairy enterprise somehow if it was to have a future.

“I had seen some more extensive grass-based systems and thought it might be a possible option for our set-up. But we needed concrete evidence that such a large system change made sense financially.”

“We used our own figures to see the effects of possible changes on things like cashflow, labour requirement and profit.

“We compared three options for the business and it was clear both grazing options made us more money than our higher yielding, year round calving set-up.”

The figures showed a move to a grass-based, autumn block-calving system would mean large savings on feed, bedding and vet bills.

After speaking to consultants and other farmers at the workshop, Ben and Ian didn’t hang about when they returned home. The workshop finished on 22 February 2012 and Ben turned the cows out on 27 February.

“We put in 28 paddocks – enough for 42 feeds – ensured the water supply was good and let the cows do the rest.

“We decided to keep our Holstein cows in order to maintain the herd health status. They’ve done a lot better on the grazing system then I dared hope.

“Yields have reduced to about 9,400 litres, and I expect them to settle closer to 8,000 litres as we continue down this route and move to completely autumn calving and swing towards more British Friesian breeding.

“But the savings have more than made up for the drop. Even down to things which are difficult to put a value on straight away like improved fertility and feet.”

Concentrate use a cow has fallen from 4t to 2.8t, and again Mr Walker expects that to fall as the herd enters its second season on grass. Mastitis rates have reduced by 40% and the vet bill has fallen by 33% so far.

“Moving to block calving has helped us eliminate some inefficiencies within our system. We’ve reduced labour usage by managing heat detection, serving, calving and drying off as single blocks. It gives me more focus.”

In fact the change has given Mr Walker and his father a new enthusiasm for dairying and future plans include the expansion of the grazing herd, but only when the figures stack up.

To find out more about Planning for Profit workshops, visit www.dairyco.org.uk