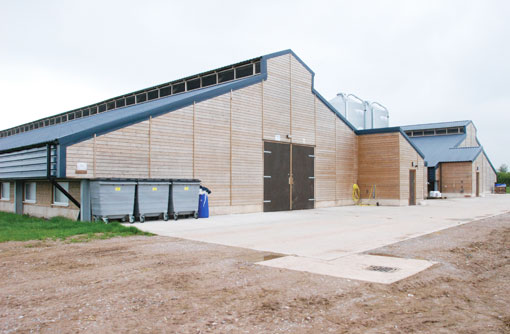 As farmers face increasing pressure to expand in order to boost profits, Rhian Price looks at how diversification into year-round turkey production has paid dividends for one beef farmer.

Growing a farming business doesn’t have to mean upping acreage – a problem many producers face if they want to enlarge the size of their farm.

For Gloucestershire farmer Dave Brewer it was a case of using the space he already had. “Because we only have a limited amount of acreage it had to be something quite intensive,” explains Mr Brewer of Gravel Farm, Westbury-on-Severn.

After months of deliberation he realised the obvious choice to sit alongside his 150-head beef herd was staring him in the face. “I remembered I had seen a turkey enterprise on a Young Farmers’ visit years ago and it just struck me as a good option.

“A lot of staff is required for eggs and broiler production, but with turkeys it is a relatively quick turn-around, so it was the perfect idea,” he adds.

After careful research, visiting various units to see how they operated in practice, and meticulous planning and cost evaluation with the help of his farm consultant Kevin Edwards of the Farm Consultancy Group, Mr Brewer received the £550,000 funding needed for the project and secured a contract with Cranberry Foods.

Planning went through with surprisingly little hassle and the build started in June 2010.

Return on capital was key, so over-budgeting ensured return was sufficient. But it also meant the scale of the project needed to grow. “It expanded before it even began. Even though it was more money initially, the payback was much better.”

Now on his fifth crop of birds, the investment has paid dividends and Mr Brewer is achieving an average turnover of £250,000.

“It’s the best thing I have ever done and it’s allowed me to come home to farm full-time,” says Mr Brewer.

The two sheds are state-of-the-art. They each span an area of 300ft by 60ft and house a total of 5,500 birds on a three-crop annual rotation.

The birds, which are supplied by Cranberry, go into the shed at between 35-40 days, averaging 1.7kg and they are depleted at 140 days, having put on another 16.3kg to reach around 18kg.

The turkeys are put on a ration of 88% concentrate and 12% wheat, with the wheat slowly increased up to 27% as the birds near finishing. “This is done really to cut down on concentrate and minimise costs,” Mr Brewer explains.

Monitoring growth rates is crucial and weighing scales inside the shed allow Mr Brewer to record the weight gain of a number of birds each day and adjust feed intake accordingly. Daily liveweight gain is between 140g and 170g, while mortality rate stands at 4-5%.

Heating is another key factor and, as the birds reach maturity, the temperature is gradually decreased by 0.1C each day to encourage optimum growth, starting at 20C at arrival and reaching 12C by depletion.

The shed has been specifically designed to optimise weight gain and to suit the micro-climate of the farm, which is situated alongside the River Severn.

It features roof vents which are angled at a 22° slant to make full use of the natural wind. Coupled with side inlets, which are computer controlled, and four Climatec recirculation units, it ensures the shed is kept at the optimum temperature for growth and keeps the bedding dry.

While a beef and turkey enterprise may not seem like a likely combination, they actually work quite well together. “It fits really well, because the beauty is you don’t have to spend all day with the birds. I find it a good balance,” Mr Brewer says.

While he admits it has been a steep learning curve, his knowledge of stockmanship has been indispensible.

“You’ve got to rely on your instincts. You can see as soon as you walk in the shed if something is wrong with the birds. It’s just that initial gut feeling,” he explains.

The move into year-round turkey production has been made easier by professionals at Cranberry and consultant Mr Edwards, who have been on-hand to provide expert advice.

According to Mr Brewer, it is this guidance and attention to detail during the planning stage which has paid off the most.

So what’s his message to others? “Definitely use a consultant and don’t be afraid to ask questions and take advice,” he says.

Kevin Edwards is the founder of Farm Consultancy Group. His five top tips for diversification are:

• Cost everything out to ensure turnover is sufficient

• Over-plan your expenses and under-plan income