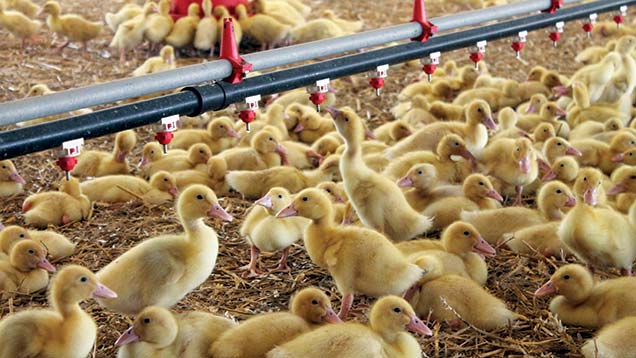 Reputation counts for everything in the food business – and even more so if your name is attached to your product.

As such, East Anglian duck producer Gressingham has been a solid supporter of the British Poultry Council’s Duck Assurance Scheme (DAS), first launched in 2010 and now affiliated to the Red Tractor.

Indeed, since April last year, all company farms and contract growers have had to be DAS members.

“Duck welfare has always been at the top of our priority list,” says commercial farms manager Andrew Ballantyne.

“But high standards are a pre-requisite at all stages, and that requires great attention to detail.”

The scheme is certainly comprehensive. The section covering table birds alone runs to 65 pages, and there are similar-sized sections for breeder replacements, breeder layers, hatcheries and free-range ducks.

The scheme covers all manner of activities, from traceability to transport. But the crux of it at farm level relates to things such as bird health, biosecurity, housing, handling, feed and water.

“All our birds are inspected three times a day to check for signs of illness, injury or stress,” says Dr Ballantyne. This involves more than just a cursory glance, with the stockman slowly walking among the birds, encouraging them to move.

Full records are kept following each inspection, and every farm has a written health plan, which must be reviewed annually.

A detailed production record is also kept, to monitor things such as water consumption, mortality, house temperature and use of medication.

Salmonella control is another key part of the DAS, with birds swabbed at three weeks old and/or litter samples taken two weeks prior to slaughter.

“We change our foot-dips at least twice a week, and sometimes more,” says Dr Ballantyne.

Providing a desirable living space is another key part of the DAS, and at Gressingham this means natural daylight, with all sheds having windows and/or curtains.

The ducks are given a minimum of six hours continuous darkness as part of the lighting programme, and dimmers are used to simulate dawn and dusk periods in the winter months.

Ventilation is also important, to reduce humidity and maintain temperature.

Most of Gressingham’s sheds are set up with canopy gas brooders and tunnel ventilation, and there are typically three-zoned temperature sensors in each building, linked to alarms.

But if there is one issue that really grabs the attention as part of the DAS, it is access to water.

Half of all water space must be provided by open water systems. But under DAS, water may also be provided via bell drinkers and/or nipple drinkers.

If nipple drinkers are used, then additional open water must be made available – deep enough for the duck to cover its head – either in the form of troughs, bell drinkers, cups during brooding or showers.

“We are not here to bounce one assurance scheme off another, but the fact remains, preventing full-body access to drinking water is far better for the birds’ health,” says Dr Ballantyne.

“We do have troughs on some farms, but they are covered, to prevent the duck from climbing in.

“If they do get in, they almost automatically defecate – they do not know the difference between drinking water and toilet water.

Since we went to 100% DAS last year, we have seen a big drop in the incidence of septicaemia and a fall in the use of antibiotics.”

Indeed, overall mortality is now less than 5% for the company’s barn-reared ducks, compared with nearer 10% for its free-range birds.

As duck houses go, the 19,000-bird unit at Stallards Farm, near Attleborough in Norfolk, is probably as good as it gets.

The building is reminiscent of a modern broiler house, both from the outside and within, with plenty of windows, lines of feeders and drinkers.

Four 24in and 10 48in fans drive the tunnel ventilation system.

As with all other Gressingham farms, the birds are “all in, all out”, with no multi-age sites.

At a day-old, the ducklings weigh just 45g, arriving at a house that has been pre-heated to 29C.

They are brooded for 12 days under LPG-fired heaters, with temperature dropping by 1C a day to reach ambient temperature, by which time they will have reached about 500g.

The fans maintain an even temperature, with airflow typically recorded at 2-3m/sec in the middle of the shed.

Stocking rate is kept well below the 25kg/sq m maximum set by the Duck Assurance Scheme – more like 16kg at Stallards Farm, equivalent to about five adult ducks per sq m.

“We are more comfortable at this lower level, as we can pay more attention to detail and achieve higher welfare standards,” says commercial farms manager Andrew Ballantyne.

Drinking water is provided through nipples – one for every 12 ducks – with open water in bell drinkers. These are swapped for turkey-sized bell drinkers at 21 days, to account for the growing birds.

The sheds are bedded down with fresh, chopped straw every day to keep the floors dry, with each duck accounting for 2.5-3.5kg of straw over its lifetime.

“We have a barter arrangement with our neighbouring farmers,” explains Dr Ballantyne.

“We give them 2t of muck for every 1t of clean straw, plus we pay the cost of baling. It’s called Norfolk money.”

Feed is a very simple wheat/soya/vitamins/minerals starter ration for the first 17 days, changing to a lower-protein grower ration thereafter.

Feeder height is tweaked daily as the birds grow and the floor height slowly builds up.

On this regime the ducks thrive, achieving a slaughter weight of 3-3.1kg after about 40 days, at a feed conversion ratio of about 2:1.

“This is a vast improvement on 10 years ago, when it was more like 3:1,” says Dr Ballantyne.

“There has definitely been a genetic improvement in our bird, and we understand the nutritional requirements much better.

“But mostly it’s down to better management and environmental controls.”