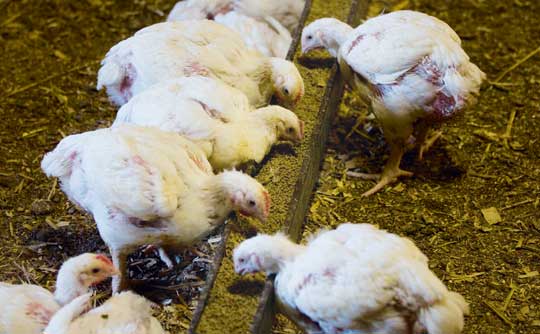 Terry Prince: Mr Prince is the owner of Prince Nutrition Services, an independent consulting firm in Auburn, Alabama, USA, providing nutritional and management support to the pig and poultry industries. He has previously served as assistant professor of animal science at Auburn University, executive vice-president for Akey, Inc and director of global technology for Provimi.

Peter Chrystal: Mr Chrystal has a degree in animal science from the University of Natal. His early career was in the South African feed sector, before he joined Tegel Foods, a leading broiler company in New Zealand. He worked for Bromley Park, doing Cobb 500, Hubbard Flex and Shaver layer nutrition, before returning to Tegel as head of nutrition.

In basic terms, how do enzymes work and how do they affect the bird?

PC: Enzymes are highly specific catalysts that play a key role in many metabolic reactions within the bird, including the digestion of food. They are required within the digestive tract to break down complex molecules such as proteins into smaller peptides that are then available for absorption and utilisation by the bird.

TP: Feed enzymes reduce the cost of production by allowing the bird to more efficiently utilise the nutrients in feed ingredients, or by preventing negative physiological reactions to the undigested complexes. Phytase is the most common feed enzyme, breaking down indigestible phytin-phosphorus and allowing absorption of the phosphorous. Other feed enzymes target complex non-starch polysaccharides such as xylans, glucans or ß-mannans.

PC: Enzymes such as phytase improve the availability and therefore the digestibility of nutrients such as phosphorus and this, in turn, allows the nutritionist to take advantage of the improved digestibility in formulating feed. Not only do enzymes reduce the cost of feed without an adverse effect on performance, but they have also been shown to reduce nutrient excretion and therefore cut the environmental impact of emissions.

TP: ß-mannans are anti-nutritive, non-starch polysaccharides compounds or fibres from plants. They are long repeating chains of mannose units bound together by ß-1,4 linkages with galactose side groups attached to the backbone by branch points from their six positions. The main sources of ß-mannans in common poultry diets are soybean meal, other legume meals and sunflower meal.

What do ß-mannans do? How do they affect performance?

PC: ß-mannans are essentially a form of plant fibre that broilers are unable to digest. They are strongly anti-nutritional in poultry and are known to interfere with glucose metabolism. ß-mannans increase viscosity within the gastro-intestinal tract (GIT) of the bird and depress growth rates. These changes occur because the innate immune system mistakes the ß-mannan fibres for invading pathogens.

The presence of these fibres may also significantly increase fermentation within the small intestine, since they are an excellent substrate for many potentially pathogenic bacteria. They also increase the length and weight of the GIT.

TP: The ß-mannan structure is similar to molecular structures found on microbes and pathogens, so the immune system may mistake them as invading pathogens. ß-mannans are recognised as potentially harmful and can therefore provoke a wasteful activation of the immune system.

Immune activation ­increases the nutrient requirement for maintenance, thereby decreasing energy availability for growth. This ­process of immune activation by compounds in the diet has been called a Feed Induced Immune Response (FIIR).

What is the purpose of this Feed Induced Immune Response?

TP: Substances can be consumed by the animal that may be harmful, such as microbes, pathogens or toxins. The immune system identifies these compounds through pattern recognition and triggers a response to protect the host. Some compounds in feed ingredients have structural patterns that mimic those of microbes or pathogens and can result in activation of the innate immune system.

How much energy does this Feed Induced Immune Response consume?

PC: On average, the energy required to mount the FIIR would be equivalent to about 110 kcal/kg apparent metabolisable energy (AME) of feed. This is approximately equivalent to the energy value supplied by 2% of added fat in feed. It is a significant proportioning of dietary energy away from utilisation for weight gain and feed efficiency.

TP: The magnitude of the response depends on many environmental and production effects, but the potential for FIIR to consume up to 3% of metabolisable energy intake is realistic.

What is Hemicell and how does it work?

TP: Hemicell is a feed enzyme that binds with and breaks the ß-1,4 bond of the ß-mannan structure and degrades it into simple carbohydrate chains or mannan-oligosaccharides. This reduces the ß-mannan recognition by the innate immune system.

What makes it different to other feed enzymes?

PC: Researchers have found that Hemicell simply reduces the anti-nutritional effects of ß-mannanase rather than cleaving the molecule into smaller molecules that could then be utilised by the bird as an energy source. Hemicell operates as an “energy sparing” enzyme in feeds rather than attempting to alter indigestible long chain complex molecules into smaller, digestible fractions.

TP: Most feed enzymes benefit by breaking down indigestible or poorly digested compounds into components that can be easily digested or absorbed. Hemicell works to break down a non-starch polysaccharide that is known to stimulate the innate immune system, thereby sparing nutrients that would otherwise be used by immune system activation.

If I use Hemicell, can I reduce energy in my rations?

PC: Even with the inclusion of other non-starch polysaccharide enzymes, such as xylanase in the feed, there is an additional benefit to the energy-sparing effect of Hemicell. As a rule of thumb, I usually take half the uplift in my matrix (110 kcal), an AME uplift of 55 kcal/kg of feed would be used for feed formulation, as a conservative view, and any added benefit would then accrue “on top” of the value used.

TP: Typically, yes. Since Hemicell spares energy used for maintenance, more energy is available for productive traits such as weight gain. Fewer calories are needed from other ingredients when Hemicell is formulated into the diets with its matrix values for energy.

Are there any other benefits to using Hemicell?

PC: There are two very important additional benefits. The first is a significant improvement in broiler uniformity. Jackson (2009) demonstrated that a 2.1% improvement in the coefficient of variation was achievable on bodyweight using Hemicell compared to controls without the enzyme and our trial data has agreed with these ­findings.

The second benefit we have seen is in litter quality. The New Zealand poultry integrator that I work for has a state-of-the-art trial facility to measure responses very accurately. Using in-house trial data and modelling software, we are able to achieve broiler performance that is substantially better than the breed standard.

To do this we feed broilers high-protein diets and, as a result, we struggle with litter moisture. Using Hemicell, we were able to show that litter moisture was reduced by 18% over our standard programme. This would be more than enough justification to use Hemicell, even without the other added benefits.

We enjoy an average as hatched FCR of 1.50 to 2.3kg liveweight at 34 days. Hemicell is a very important part of our arsenal in achieving this performance.

TP: Research has shown Hemicell may spare amino acids, adding to the benefit of the overall matrix value. Also, it can be added to meal feeds or pelleted feeds as a heat-stable product is available in most markets.

Terry Prince is the owner of Prince Nutrition Services, an independent consulting firm in Auburn, Alabama, USA, providing nutritional and management support to the pig and poultry industries. He has previously served as assistant professor of animal science at Auburn University, executive vice-president for Akey, Inc. and director of global technology for Provimi.

Peter Chrystal has a degree in animal science from the University of Natal. His early career was in the South African feed sector, before he joined Tegel Foods, a leading broiler company in New Zealand. He worked for Bromley Park, doing Cobb 500, Hubbard Flex and Shaver layer nutrition, before returning to Tegel as head of nutrition.

For more than half a century, Elanco has been supplying products to help improve animal health and protein production in more than 75 countries around the world.

The company is committed to research, development and implementation of products that benefit animals, consumers and the environment, while providing a positive economic return for farm animal production.

Following the acquisition of Janssen Animal Health in 2011, Elanco is proud to be the new supplier of Flubenvet,
Solubenol and Poultry Tonic. For further information contact 01256 353 131 or elancouk@lilly.com