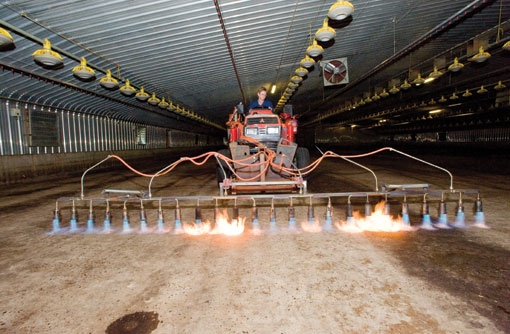 Investing in state-of-the-art technology can cut production costs, improve bird welfare and help save the environment, according to one of the UK’s largest broiler producers.

Alan Simpson produces 500,000 chickens at Lower Heath Farm, Prees, Shropshire, where he has erected a number of new sheds featuring under-floor heating, windows and a novel roof design to pre-heat or cool incoming air. “The under-floor heating is a major contributor to improved productivity,” he told the SWCA conference. “It is 2p/bird cheaper than traditional gas brooders.”

Mr Simpson designed the shed roofs to feature a top inlet chamber, where fresh air is brought in alongside hot water pipes. This pre-heats the air to 28°C, even if it is –10°C outside, resulting in a more even house temperature, drier litter, and lower heating costs.

“Although the litter isn’t as good next to the windows, they do create a wonderful working environment,” he adds. The air inlets can also mist water over incoming warm air to cool it in hot weather.

With such a high turnover of chickens, Mr Simpson is meticulous about bio-security and record-keeping. All lorries are weighed in and out of the site, and feed delivery vehicles use the farm’s own blow pipes. At turnaround, the sheds are disinfected using a crop sprayer, and then the floors are burned at extreme temperatures to kill any remaining bugs. “We go to extraordinary lengths to keep hygiene high.”

In addition, he has designed his own equipment to make life easier, including a unique chick unloader. Using a series of belt elevators, workers unload the chicks directly from the delivery truck into a holding chamber, which is attached to a tractor. The tractor can then be driven down the chicken house, unloading 20,000 chicks a minute via the elevator belts, which minimise vertical drops and jolts. “Two people can put 470,000 chicks out in just four hours, and you immediately get a very even spread throughout the house. It has transformed our lives.”

To further reduce costs and greenhouse gas emissions, Mr Simpson has sold the roof space on 11 sheds for solar photovoltaic energy production. It will produce 2MW of electricity a year, supplying the farm’s electricity needs free of charge.

ClimaUnit2 heat exchanger should pay for itself within three years 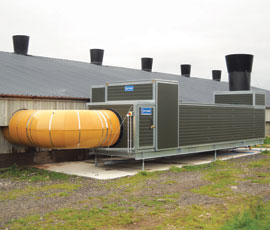 When Leon Furlong bought a disused poultry unit near Starston, Norfolk, he decided to investigate cheaper – and environmentally friendly – ways to run it.

With plans to build 100,000sq ft of sheds, not only would renewable energy production future-proof the farm, he thought it might also make it easier to obtain planning permission.

After extensive research, he opted for a ClimaUnit2 heat exchanger, which ventilates the poultry shed, removes dust and pre-heats incoming fresh air, cutting gas usage by 50%. Mr Furlong finished installing the unit in 2008, and the system proved so successful that his brother has now supplied about 150 units to farmers throughout the UK, via a division of Vencomatic.

“Trials on 35 UK broiler sheds gave an average of 52.9% savings on gas consumption,” he told the SWCA conference. “I bought it purely because it was going to save energy – but we’ve found improved welfare and growth as well.”

By pre-heating fresh air, the exchanger cuts down on draughts and cold spots, and has the potential to remove an average of 75% of dust from air put through the unit, as well as 52% of ammonia, 40% CO2 and 31% of odours.

“The working environment is a lot more pleasant. Between 15% and 20% of poultry workers get significant lung damage from dust – it is going to become the new ammonia, and there are quite a few people out there who are under notice to reduce their ammonia levels.”

The reduced gas usage means farmers will save about 8.5t of carbon a year, for 85,000 birds, said Mr Furlong. “By 2012, IPPC regulations require poultry farms to lower their carbon footprint, and improve the farm’s environmental performance. [By installing a heat exchanger] you are doing everything the Environment Agency wants.”

Moisture levels, produced by burning gas to heat houses in the traditional way, drop by 53%, he told the conference, resulting in drier litter and cutting top-up litter costs by 58%. The chicken also have less pododermatitis, fewer hockmarks, lower mortality and factory rejects, as well as 24g extra weight gain on average.

The units are self-cleaning, with filters needing to be replaced or cleaned about once a year. With the fans run on a frequency controller, running costs are similar to traditional ventilation.

Although a large unit typically costs £35,000 to install, it could yield savings of about £10,000 a year, resulting in payback within three years, Mr Furlong claimed..