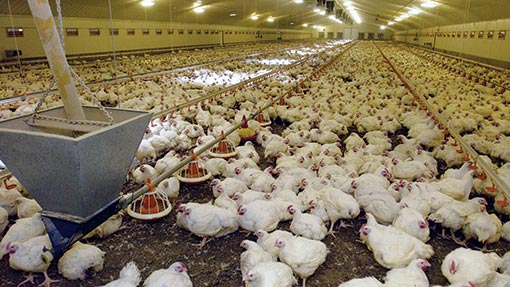 Antibiotics need to be used “as little as possible, but as much as necessary”, says poultry vet Andrew Walker of Slate Hall Veterinary Services.

“Antibiotics certainly have a place in a sustainable poultry industry, to maintain health and welfare of the birds,” he says. But current concerns about the link between antimicrobial consumption and resistance in humans, together with the lack of new active molecules being developed, mean the sector is going to have to be much smarter in the way it uses the drugs.

“We should never compromise the health and welfare of the bird just to try and meet a benchmark figure of milligrams of antibiotic per kilo of meat,” says Mr Walker. “But as a poultry industry, we can have some impact on safeguarding against antimicrobial resistance in humans.”

In particular, he recommends a strategy based around the “3 Rs”, namely to reduce, replace and refine the use of antibiotics.

When it comes to reducing antibiotic use, there is no substitute for stringent biosecurity at all stages of the production chain, says Mr Walker.

“The aim is to reduce the levels of endemic disease arriving in the first place. But it has to be an holistic approach. It can’t just be about looking at the vaccination strategy and forgetting about hygiene.”

The starting point for any biosecurity programme is to establish the disease status of the flock, through a bespoke screening programme, says Mr Walker. Producers need to know what the risks are, and what they are trying to keep out.

“It is also useful to establish some veterinary intervention points based on Key Performance Indicators, such as mortality, daily liveweight gain or egg production levels. If you put triggers in place, then you’ll know what is an acceptable level, and you can react to that.”

Free-range egg production systems throw up particular challenges, he adds. “It’s obviously more difficult to keep a biosecure site when your birds are exposed to the outdoors, when they’re ranging in muddy conditions with access to wild birds. You therefore need a tighter biosecurity programme, covering things like dead bird disposal, visitors to your site and vaccination to minimise disease challenges.”

Another key area to reduce antibiotic usage is in chick production, starting with the breeder farm. “A lot of bacterial loading can happen in the earliest stages, starting with point of lay,” says Mr Walker.

Good breeder health and egg shell quality are crucial, as is litter condition. “Nest box hygiene and management can also play a big part in reducing the bacterial loading, as can egg handling and storage.”

In the hatchery too, there are plenty of opportunities to manage the risk of bacterial loading, for example by controlling condensation on eggs through humidity and temperature management, and by careful egg handling to reduce micro-cracks. Bacterial contamination should also be minimised immediately post hatching, when the chicks are particulalry susceptible to infections.

Once the chick reaches the broiler farm, it is important that any medication is based on a risk analysis, to ensure that it is appropriate and targeted, says Mr Walker. That assessment should take into account the source flock history and its progeny history, as well as the health record of the broiler farm being considered.

But any analysis should also be workable, so that decisions on bird medication can be taken swiftly.

Water hygiene is another area that vets have been focusing on, aiming for total bacterial levels below 100cfu/ml, and coliforms below 50cfu/ml. “The chick can take in twice as much water as feed,” says Mr Walker. “But water is a perfect growing medium for most bacteria.”

If the water sits there, with an ambient temperature of 30C and limited flow rates, bacteria can build up and form protective biofilms. Using the water systems for administering vaccines and supplements also increases the risk of drawing in bacteria from outside sources.

In particular, it is necessary to check the source of the water, and to maintain hygiene in header tanks, which often sit high up in buildings, where temperatures are high and dust collects.

Developing the chick’s own immunity is another key area for reducing later needs for antibiotics. “We’ve got to make sure that the birds we are producing have the best immunity we can provide them with,” says Mr Walker.

Vaccination programmes for the breeders must also cater for the chicks they are producing, to maximise maternally derived antibodies (MDAs). Care must also be taken to reduce stress at time of hatch and to optimise brooding conditions. “A lot of the bird’s immunity is coming from the yolk sac. Early feed intake and yolk sac absorption is crucial – as is controlling immuno-supressive diseases.”

Poultry geneticists also have an important role to play in reducing antibiotic use – especially since the introduction of genomics, which enables breed companies to pinpoint selection criteria more accurately.

Things like improved egg shell quality, cuticle structure and stronger chick immunity could all be influenced by breeding, as could more resilient intestinal health.

While there are no direct replacements for antibiotics, there is a range of alternative treatments which are coming to market and have a place in disease control.

“Competitive exclusion products, for example, exclude the pathogenic bacteria by seeding the birds with a commensal non-pathogenic bacteria early on. The most effective of these tend to have quite a diverse range of bacterial species, from lactic acid bacteria to strict anaerobes.

“We don’t quite know yet the full microbiology that makes up the chicken’s gut. We’re only at the tip of the iceberg in knowing what is going on at molecular level. Also, the bird’s gut is going through a huge and rapid change in these early stages. But we have seen some successes with competitive exclusion.”

Live vaccines are another option which, as well as giving long-term protection within the bird, could have therapeutic benefits. “For example, we’ve seen good results with a non-pathogenic E coli live vaccine, where we’ve used it in the face of an outbreak of peritonitis in laying hens.

“We’re not totally sure how it works, but we assume that the live bacteria within the vaccine are competing for the attachment sites with the pathogenic strains. We could see increased usage of live vaccines.”

A wide range of prebiotics are also available, such as mannan oligo-saccharides and fructooligo-saccharides, which enhance the natural intestinal flora, promoting the growth of probiotic species, such as lactic acid bacteria, so reducing colonisation by enteric pathogens.

“They are not sufficient on their own to replace antibiotics, but they certainly add to the profile of things we can use to reduce overall usage.”

Similarly, nutraceuticals like nucleic acids, amino acids and plant derivatives have a place as part of an holistic approach. And organic acids, delivered through feed or water can help.

“Organic acids delivered through water have the advantage of helping to sanitise the water system, as well as having an impact on the gut,” says Mr Walker. “Different acids affect different parts of the gut, depending on their individual dissociative properties and residual pH.

“They alter the gut microflora by limiting the colonisation of unfavourable bacteria, while promoting the fermentation of more favourable species. They can also enhance nutrient uptake and increase immune response.”

The key objective is to be using antibiotics smarter, says Mr Walker. “We’ve got to be looking at the sensitivity data out there before using antibiotics, to make sure the organisms we are treating are sensitive to the treatment.”

There is also a dilemma between the use of narrow spectrum or broad spectrum antibiotics. “Quite often we also see an underlying bacterial disease, but with a secondary E coli infection that is causing mortality. The sensitivity profiles of the antibiotics we choose will be very different for the two bacteria. This is leading to vets using more broad spectrum antibiotics, though this is known to increase the risk of antimicrobial resistance.”

It is also essential to get the right dose rate, as certain bacteria are dose-rate sensitive.

“Duration of treatment as well is important,” says Mr Walker. “Do you use these antibiotics over a shorter period to ensure that you are maximising the pharmacokinetic and pharmacodynamics properties, or do you look to put the antibiotics through the bird for a longer period?”

Another question to do with refinement is whether vets should look to safeguard products that are critically important to humans.

And then there is the question of measurement. Benchmarking figures to understand exactly how much antibiotic is being used by different sectors is key to achieving more targeted reductions.

“At the moment the broiler industry is very much focused on milligrams of antibiotic per kilo of meat,” says Mr Walker. “The downside of this is that it doesn’t take into account the class of antibiotic being used. The danger is, if you say you have to drive antibiotic usage below a certain threshold, you can increase the pressure on a particular class of antibiotic.

“The classic example is quinolones, where they have a lower therapeutic dose rate compared with some of the other antibiotics out there. This isn’t the way the industry should be going. It should not be looking just at milligrams per kilo, or even milligrams per egg, but at the type and classification of those antibiotics.”

*The above paper is based on a presentation by Andrew Walker at the recent World Poultry Science Association symposium in Chester.