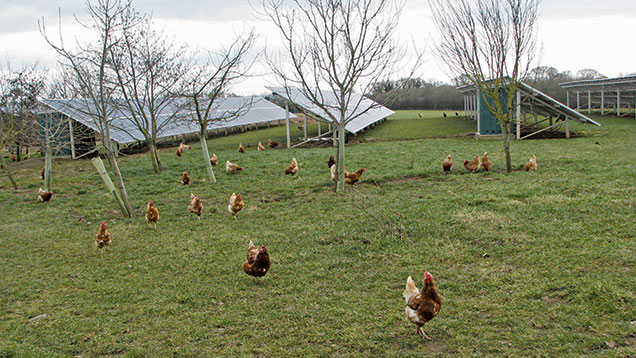 The threat of avian influenza (AI) is ever present for British poultry farmers and one of the most significant sources of infection comes from wild birds.

But keeping the two permanently apart is far from straightforward, with migratory species believed to have been behind both the two recent cases of AI in the UK, notwithstanding the fact that both outbreaks were in indoor units.

The threat is certainly ever-present in the mind of free-range egg producer James Potter, whose Yorkshire Farmhouse Eggs business at Thirsk, North Yorkshire, has been producing free-range and organic eggs for the past three decades.

The family has a 240,000 bird enterprise of its own, with flocks also kept on contract with several other local farms, taking total production to 650,000 birds.

“We have invested time and money into the welfare of our hens, and making sure that the ranges are fully utilised plays an important role in our production system,” says Mr Potter.

For example, a number of hedges and trees have been planted to encourage ranging and provide shade and shelter.

Solar panels, which provide electricity for running the packing station and sale to the national grid, have a similar effect in encouraging birds to explore the far reaches of the range.

But these types of range enrichment have a downside, Mr Potter points out. “There is no doubt that features which enrich the lives of the hens also attract wild birds. That causes a conflict which is difficult to resolve.

Defra’s Guidance on Biosecurity and Preventing Disease in Captive Birds contains a detailed section on protecting flocks from wild birds.

In particular it suggests the following:

“Some of the paddocks are adjacent to woodland and it acts as a magnet for wild birds. Game shooting is not permitted on our land, because of its association with pheasants. But we cannot stop our neighbours from shooting in that area, if they wish.

“In addition, a river runs alongside our boundary and so wild ducks and geese are also a potential threat. We have taken steps to keep our birds away from that area.”

Other ways in which the Potters follow Defra’s guidelines for deterring wild birds include providing feed and water inside the housing, as well as ensuring that feed silos and containers are sealed.

In theory, wild birds could enter the buildings through the popholes, but in practice this does not occur, as the entrances are well “patrolled” by the hens themselves.

The ranges are securely fenced, to keep contact with wildlife to a minimum, with fencing also erected to keep the birds from coming into contact with the areas designated as wagon loading stations.

But the Defra guidance on preventing the accumulation of standing water is not so easy to follow.

“We have carried out extensive drainage on the ranges, to comply with this rule,” explains Mr Potter.

“As well as being keen to follow the guidelines, it makes common sense to keep the paddocks in good condition. That means doing all we can stop the soil from becoming compacted and water-logged.

“But as every free-range producer knows, heavy rain can sometimes lead to the formation of puddles. The key is to have the areas properly drained, so that standing water soaks away quickly.”

Mr Potter is convinced that the family has done everything in its power to minimise the risk of contamination by wild birds.

“Only limited information has been released about the recent outbreak of avian flu in Yorkshire. However, I understand that the disease was found in an intensive flock. That surprises me somewhat, as it might have been expected that free-range flocks would be at the greatest risk of infection.

“We have a vested interest in keeping our hens from mixing with wild birds, to minimise the chance of a disease outbreak. But at the end of the day, some compromises have to be made, when trying to fulfil the regulatory requirements,” says Mr Potter.

Eggs are supplied to several of the major retailers, among which are Asda, Tesco and Sainsbury’s.

The business also acts as a hub for a number of other food producers, whose products include beer, jams, pies and sausages.

The Potters also have an egg packing station in Sussex, and a share in a second, similar business in Cambridge.

The free-range paddocks are rested periodically, with the popholes closed and the buildings used to produce barn eggs.

The family also runs a plant hire business and some of the ranges also serve as a storage area for topsoil.