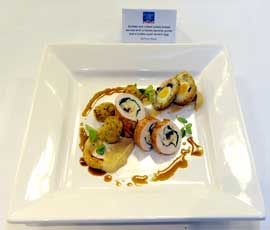 And Kathryn Bash from Colchester Institute impressed with her main course of stuffed and rolled turkey breast served with a honey parsnip puree and a turkey quail scotch egg.

The winners will now have the opportunity to cook their dishes at The British Turkey Awards dinner for 250 guests at The Savoy, London in September, and will also receive catering vouchers worth £350.