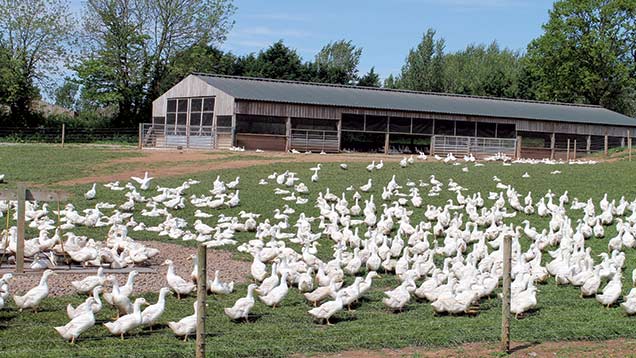 Order duck in a London restaurant, and there’s a fair chance that it’s come from Creedy Carver, a small, but thriving farm in mid-Devon.

Owned and run by the Coleman family, it was a former pig unit, before James Coleman converted it to duck production in 1999. “We got 50 ducklings delivered by Parcel Force every week,” he recalls.

“They arrived by train and I had to go to Taunton to pick them up.” Times have changed and, since 2012, the business has grown by 40%.

See also: Getting to grips with common duck diseases

The home farm, Merrifield, contains some 25,000 ducks, and there are two more sheds on a 10ha off-lying site finishing 6,000 every five weeks.

The farm now has its own slaughtering and processing plant, killing 5,000 ducks a week, as well as 12,000 chickens, reared on contract.

Although the business began as barn-reared duck, the focus is now on free-range.

“I do like to see them out on the range and encouraging them to act naturally,” says Mr Coleman.

“The RSPCA says you don’t have to give them access to a pond, but without one they will only range early in the morning and in the evening – with a pond they stay out all day.”

The ducklings arrive as day-olds from Cherry Valley Farms in Lincolnshire, and are reared in brooding sheds until they are 22-25 days old.

Bedded on straw with spot brooders, they are fed a starter crumb from nearby Crediton Milling for 10 days, before moving on to duck grower.

“We start them off with an ambient temperature of 32C, though I’ve never measured it – the birds will tell you if it’s too hot or cold as they’ll be too spread out or huddling.

“If you walk in and the air feels uncomfortable then you need more ventilation.”

The heaters remain on for about seven days in the summer, and 10-14 days in colder weather.

In the summer, the ducklings are moved into the free-range shed at 22-days-old, but that is delayed to 25 days in the winter, as the cold weather will kill them if they are not big enough.

From then on they are fed a home-mixed ration comprising 50% concentrates and 50% rolled wheat. “We aim to use our own wheat to keep costs down, and buy more in direct from local farmers.”

Although the ponds keep the birds clean, it’s important that the range is correctly managed.

“The minimum range area allowed is 2sq m/bird, but they will destroy that in no time.

The pond area is surrounded by plastic slats and stone to limit damage.

“We’re on a borehole – with mains water the bill would be astronomical.”

Unlike chicken, the ducks don’t require much shade or shelter to encourage them to range: Water is the attraction.

There are four gates on each shed, each leading on to a different range, so they have “four weeks on, five weeks off”.

“The grass grows like crazy as they’re fertilising it all the time, so we have to top it and graze it with sheep,” he says. “Every now and again we have to top up the holes with topsoil and reseed a bit.”

Ducks won’t move from light to dark, so it’s important to shut them up for the night before dusk.

Mr Coleman’s dog comes in handy to round them up each evening.

The ranges also have high-powered electric fences that are meticulously maintained to protect against foxes, but there’s little he can do against the gulls and ravens that routinely attack and kill the ducks. “We have about 2% mortality from that alone.”

Apart from predation, there are few other health issues.

“Ducks are either alive or dead. They’re not like chickens – you don’t have to vaccinate them against anything.

“The only thing to watch for is aspergillus if the ventilation and straw quality is poor – and they can occasionally get a feather infection when they’re young.”

However, Mr Coleman tries to keep as few different ages on site as possible, with thorough cleansing and disinfection after each flock.

One of the biggest problems when rearing for the Christmas market is that the ducks moult at 56 days old and produce pin feathers, which are very difficult to pluck.

“It’s quite difficult to achieve heavy weights as you can’t just keep them for a bit longer.”

At other times of the year, 80% of the ducks are portioned into breast and legs, so Mr Coleman is aiming for a very tight specification to meet chefs’ requirements. “Chefs want a breast that is consistently 7-10oz,” he says.

“That takes a lot of attention to detail, when you have unsexed ducklings to finish within a seven-day window.

“It’s crucial that the birds come in clean, dry and at the right weight. Cherry Valley ducks are meat-producing machines: In an intensive system they will finish at six weeks, but we slow them down with a lower intensity feed.”

About a week before slaughter, Mr Coleman weighs a selection of birds, and adjusts the ration to control the growth rates. A team of catchers will then take the largest birds and return for smaller ones a few days later.

The licensed slaughter plant has a vet on-site when processing, as well as two hygiene inspectors. The birds are stunned in an electric bath and then slaughtered by hand for highest welfare.

They are dry plucked for ultimate appearance and shelf-life, with the down taken off in a wax bath before being eviscerated, washed and graded for processing.

About 80% of Creedy Carver’s sales are to restaurants, many in London, with the rest going through butchers.

“I started out by approaching restaurants directly, then a wholesaler persuaded me to sell through him as I was taking all his customers,” says Mr Coleman.

“I hated doing the selling: I’m a farmer, not a salesman.”

But marketing remains extremely important. “Duck is a growing market – we’re struggling to keep up with demand,” he adds.

“But everyone wants breasts, so we’ve developed a new confit leg and breast range to encourage people to cook duck at home, as well as duck salami.

Rather than selling the legs off cheap we’re trying to market our way out of it.”

Rearing proved a bit of a rush, but straightforward for mixed farm

James Lee has been rearing ducks on his mixed farm for Creedy Carver since October 2014.

“The key thing in the early stages was getting the brooding shed finished in time for the first delivery – it was a very busy time of year for us so was a bit of a mad rush,” he says.

“We had a semi-redundant building that we knew we could convert at reasonable cost – we put an insulated false ceiling in that we can wash down easily, but the drinkers only just arrived in time.”

The ducklings arrive at a day old, in batches of 1,800 plus a 2% allowance for mortality. “The first week is a critical time – you have to warm the shed the night before, and make sure the ducklings drink and eat as soon as they arrive,” says Mr Lee.

“We have nipple drinkers, but also use water trays to start with as they’re easier for the ducks to find.”

Although the ducklings don’t use a lot of straw to start with, as they grow older they require fresh bedding every day, and each batch uses about 4t of straw.

Mr Lee tops up the feeders daily, and uses a gravity-fed hopper designed from a potato crate to ensure there is always feed available.

“It’s been pretty straightforward really – we had one group that arrived in very cold weather and we lost about 60 quite quickly, but on average mortality is between 2% and 3%.”
James Lee

After three weeks he moves the ducklings to a larger shed, freeing up the brooding shed for new arrivals.

“To start with we loaded them into a trailer, but now we just herd them across the yard – it’s a lot easier,” he says.

“It’s been pretty straightforward really – we had one group that arrived in very cold weather and we lost about 60 quite quickly, but on average mortality is between 2% and 3%.”

The greatest challenge is cleaning out and disinfecting the sheds between batches.

“We’ve also got sheep, cattle and arable land, and the cleanout takes a day for two people, so it can be difficult during busy periods.”

Creedy Carver supplies the feed, which eases cash flow, and collects and pays for the ducks on a per kilo basis.

“We’re going to start rolling our own wheat to mix with the protein pellets – with wheat prices as low as they are it’s definitely worthwhile,” says Mr Lee. “We’re also using the litter to improve the arable ground.”

In future, Mr Lee plans to swap from barn-reared duck to free-range, and is hoping to convert another barn to increase numbers.

“It cost us about £3,000 to convert the sheds, and now we know what’s involved I’d like to do another batch; it’s not that much more work when you’ve already got two on the go.