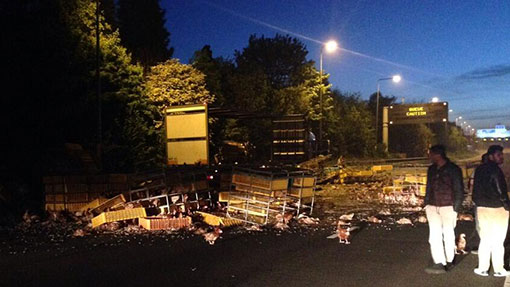 A lorry carrying 6,800 live hens to slaughter has crashed on the M62 motorway, with “about 1,500” killed on impact, leading to a chain reaction of bizarre events.

The truck crashed at around 4am on Wednesday, 14 May, a Highways Agency spokesman told Poultry World. “It struck the verge side safety barrier ahead of the A60 turnoff, and ended up lodged in place.” Though the driver was unhurt, about 1,500 of the total number of hens were killed.

He added RSPCA officials attended the scene, and aided the recapture of hens which were roaming the road. A number were dispatched at the time. The eastbound motorway was partially opened at around 10.30am.

Reports from other media have suggested birds were jumping into cars as they queued behind the crash, with a number of Twitter users posting pictures of themselves with hens.

The BBC also said “hundreds” of birds had found their way to a nearby animal sanctuary, and staff had mounted a rescue mission to get the hens to safety and find them new homes.

Animal welfare charity PETA has called for a memorial to be placed at the site of the crash. “We hope our memorial will remind people that chickens are not just body parts to pick out of buckets, but individuals with feelings who, like us, don’t want to die in an upturned lorry or at an abattoir,” a spokesperson told The Independent.