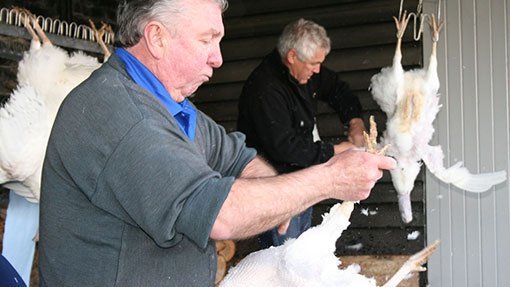 A battle between two turkey-plucking titans to find the fastest to hand-strip two birds of their feathers ended in a win for veteran Vincent Pilkington.

The contest was held between Mr Pilkington, of Cootehill, County Cavan, the Guinness World Record Holder for plucking a single turkey, and Paul Kelly, of Kelly Turkeys – the fastest man to pluck three.

Mr Pilkington challenged Mr Kelly to a “champion of champions” pluck-off in the middle ground – fastest with two turkeys.

Mr Pilkington admitted his speed had slipped since the 1min 30sec record he set in 1980 for a single turkey, which was recorded on RTE television.

“Remember I’m retired now but I still like to keep my hand in helping local farmers with plucking their turkeys at Christmas — and it paid off today,” he said.

Mr Kelly admitted he came out second best on this occasion — and congratulated Mr Vincent, whom he first met when they both competed in the World Plucking Championships in Sussex in the early 1980s.