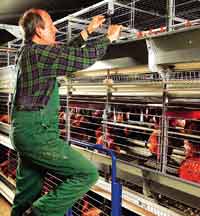 The EU egg industry has the enormous task of rehousing more than three-quarters of the total EU laying flock in just a little over three years to comply with the 2012 conventional cage ban.

The broiler industry faces its own challenges with ever tighter environmental rules over dust and ammonia emissions from poultry housing.

But some companies are actively helping the poultry sector meet these challenges by researching and investing in new technology, such as equipment manufacturer Big Dutchman aided by UK partner Newquip.

Last month saw Newquip move into its new premises, increasing its capacity, so helping the layer industry meet the cage deadline. This opening attracted a rare visit from Big Dutchman’s general manager Bernd Meerpohl, who during his visit talked exclusively to Poultry World, giving his views on the UK poultry sector and its prospects.

How many countries does big dutchman operate in and what is its main business?

Big Dutchman operates in 80 countries. Its main business is the development and sale of equipment that you might find on a pig or poultry unit.

Is everything sold under the company brand?

Almost, with a few exceptions, such as our Danish daughter-company, the ventilation equipment manufacturer Skov.

What is the volume of sales for poultry and what proportion is this of total activity?

How do you see the UK egg sector compared with the rest of Europe?

UK producers are definitely ahead of the game. They should feel proud of themselves, because they started looking at alternative and enriched colony systems much earlier than many other countries.

Are you seeing an increase, decrease or no change in the amount of investment in new poultry units in the UK?

Due to the cage ban deadline of 2012, we are seeing an increase in enquiries for new buildings, and for the refurbishment of existing farms to enriched colony systems. Most enquiries come from very large units with more than 100,000 birds. At the end of the day, however, we do not expect an increase of bird places in the UK.

Are there any lessons we could learn from the Continent in terms of housing and equipment?

Actually, I think that most of continental Europe could learn a lot from the UK. Producers in the UK accepted alternative methods very early on, and already have several years of experience with housing systems and equipment that producers in many other European countries are just getting used to now.

Do you forsee any serious problems with meeting the cage ban deadline in 2012?

The UK has converted more battery hen places to alternative and enriched systems than most other EU countries, and companies like ours have stepped up production. But producers who put off making a decision for too long will find it difficult to source labour and equipment in time to meet the deadline.

Birds already in cages at the time of the deadline will probably be unaffected. I think EU officials will take a tough line on anyone who puts new birds into outlawed systems and will have no hesitation in shutting them down.

How are you and Newquip preparing for the expected rise in demand for colony systems?

At Big Dutchman, we have already tripled our warehouse facility, mainly because the cage ban already applies in Germany, and producers have until the end of this year to compy.

Also, we increased our workforce, especially on the technical side, at an early stage. If we had not done this way ahead of time, it would certainly be too late now. The expected increase in the demand for alternative and enriched colony systems is, of course, one of the reasons Newquip has moved to a larger site.

Your presence at Newquip’s opening demonstrates your faith in the UK sector. Why do you believe our industry is so successful?

I have faith in the UK sector, because its producers have shown themselves to be innovative, and they have been flexible enough to look seriously at alternative housing systems. I also have a lot of confidence in Newquip, which has been doing a fantastic job in a difficult operating climate. The company has a very good understanding of the industry.

Are you a supporter of family businesses like Newquip?

Certainly. Big Dutchman itself is a family-run business. I work alongside my father, two sisters and my brother. Family businesses tend to fight harder to maintain profitability and high standards of customer service. Service is everything to us. The only person allowed to veto an order, if it seems too risky, is my father.

How much influence do your distributors have in developing new products?

It is fair to say that Newquip has a lot of influence on how Big Dutchman operates. Like Newquip, we are a very sales-orientated company. We are always willing to listen to feedback. If we keep hearing the same message, we will act upon it.

For example, our enriched cages have the nest in one corner. But to keep flow-through constant, the egg belt has to be brought forward periodically in response to changes in daylight hours. It is not practical to achieve this manually. But it was suggested to us that we should position a weighing scale in six locations within the shed, with weight recordings used to alert the producer to adjust the belt. That idea came from Newquip customers.

What is the next priority for product development?

The big challenge at the moment is to find air-cleaning solutions, to reduce pollution. We also want to find better ways of utilising poultry manure, and improve intelligent computer systems to reduce human error and save on labour.

Within the next 12 months, we plan to launch new equipment for air cleaning and the gasification of manure to produce green energy.