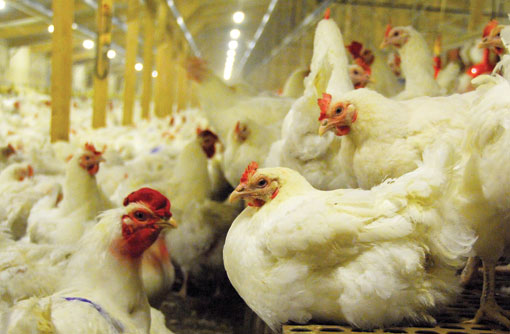 The UK poultry industry needs to become more efficient if it is to compete in a consolidating domestic market, according to analysts at Dutch bank, Rabobank.

In its recent report into the industry’s future competitiveness, it says the current structure of the main integrators is ineffective when it comes to competing with powerful British supermarkets.

Furthermore, despite operating in one of the highest value-added markets in the EU, the British poultry industry has faced falling profit margins due to high feed prices, limited volume growth and oversupply.

On the demand side, Rabobank says the UK poultry market is close to its maximum absorption level, with no rise in per capita consumption. What growth there is stems from population expansion alone.

The report also says the industry has failed to capitalise on its strengthened market position, associated with the depreciation of sterling and new marketing standards, which prohibits the use of frozen poultry in fresh processed food products.

“The UK poultry industry is not well-known for having an efficient value chain, which is one reason why (foreign) exporters are still able to maintain market competitiveness despite the pound sterling depreciation,” it explains.

And, while UK consumers are prepared to buy high-quality products at premium prices, many of these can also be outsourced to international suppliers for less money.

“Only one company, 2 Sisters Food Group (2SFG), has broadened their scope to include this region and they are the only ones to have been able to reap the benefits of more flexible and efficient sourcing. We expect others to follow this trend in the coming years in order to achieve maximum efficiency and flexibility.”

The analysts also say the oversupply situation has been instrumental in reducing potential margins.

“The UK market is out of balance due to the excessive local supply growth in 2010 and a recovery in imports, especially from The Netherlands and Ireland, who have been targeting the attractive fresh-cuts market in the UK.”

Increasingly, processed products are being produced outside the EU and are being sold directly to the British retail sector and restaurant chains, Rabobank says.

It advises that the industry needs to regain market power from UK retailers to compensate for higher feed costs, which are currently making the financial environment very volatile.

“Oversupply has put retailers in the driving seat,” the report explains. “Producers without a preferred supplier relationship often find themselves in the difficult situation of having to fight for retail tenders based on price alones, or decide to only supply ingredients to supplier companies which do have retail access.

“Supply discipline should be one of the industry’s top priorities.”

Figures show that retail represents 53% of the total UK poultry market, with Tesco, Asda, Sainsbury’s and Morrison’s accounting for 84% of that business. Meanwhile catering represents 30%, with wholesale representing the smallest market share at 17%.

This concentration of power exacerbates the high levels of competition arising from high feed prices and oversupply, the report says.

Another way of counteracting the effects supermarket buying-power is to consolidate the market further.

“The industry’s structure and focus also need to change as consolidation levels have not kept pace with UK consolidation trends,” says the report. “This has prevented the industry from being able to pass on more volatile, higher input costs.”

“Companies who do not maximise efficiency will not be able to pass on cost price changes,” the report warns.

Having a key market focus will also pays dividends.

“The big trouble threatens players who underestimate the importance of strong client relationships and real supply chain efficiency. These players are often pushed into second or third supplier position.

“Companies which can combine a strong retail focus with supply efficiency and market power are in a good position to become winners in the new market dynamics.”

• Optimise efficiency in the supply chain

* “What Next for UK Poultry? Shaping the Industry for Future Competitiveness” is been produced by the Food and Agribusiness Research and Advisory section of Rabobank International.