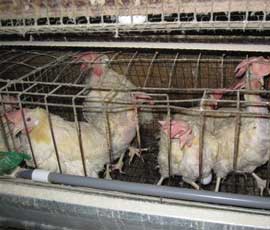 Legislators have all but killed off the US egg sector’s plans to raise welfare standards, with barren cages now set to remain the norm in the vast majority of states.

The plan was to include the draft legislation within the Farm Bill as it progressed through both the Senate and the House of Representatives in Washington.

If agreed, this would have paved the way for the introduction of enriched colony systems and increased space allowances, along the lines agreed by United Egg Producers (representing over 90% of US egg output), and the Humane Society of the United States.

An amendment to the Farm Bill was laid in April, but senators rejected it in May, having been subject to intense lobbying by other livestock groups who feared it would set a precedent for government interference in farm methods.

At the time, UEP president Chad Gregory said he was still optimistic that the so-called Egg Bill would win support in the House of Representatives, which debated the Farm Bill this week. The House was believed to include many more representatives with consumer rather than farmer interests at heart.

But the House has not only rejected the amendment, but failed to pass the Farm Bill at all, leaving support for US agriculture in a state of limbo.

Mr Gregory expressed his great disappointment. “We knew that legislating a national standard for egg production wasn’t popular with some other farm groups, and even a few egg farmers, and we tried to address their concerns as best as we could,” he said.

“But the vast majority of our board of directors supported it as the best alternative to a patchwork of conflicting state laws. I believe history will show that what we have stood for is the way of the future.

“The UEP leadership will be evaluating the best path forward in the coming months.”

California has already passed legislation improving hen welfare, as have Michigan, Washington and Oregon. Ohio is set to follow suit by 2020.

* For all the news and views on the egg and poultrymeat sectors, why not subscribe to Poultry World