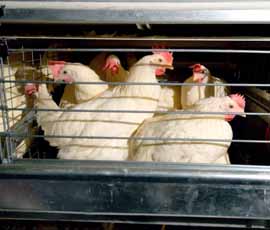 Moves to ban the use of conventional cages on US egg-laying farms have started in Washington, after politicians tabled an amendment bill to improve hen welfare.

The Humane Society of the United States (HSUS) and United Egg Producers (UEP) have welcomed the development, which is in keeping with their joint policy of raising standards in egg-laying hens.

If approved, the legislation would improve the welfare of 280 million hens involved in US egg production by 2030.

• Require all egg-laying hens to be provided with environmental enrichments such as perches, nesting boxes and scratching areas

• Make labelling on all egg packaging mandatory nationwide, to inform consumers of method used to produce the eggs

Previously individual states have approved often-conflicting standards for egg production. But, if passed, the amendment bill would supersede state laws and create a federal standard – something UEP says is the only solution in enhancing hen welfare and ensuring a sustainable future for America’s family-owned egg farms.

“Eggs are a national commodity and egg producers should have a level playing field – not have different, costly rules in all 50 states,” said Gene Gregory, president and chief executive of the UEP, which represents 88% of the nation’s egg producers.

“This agreement between UEP and HSUS represents an important and necessary step in addressing the patchwork of state laws facing the industry and providing stability for farmers moving forward,” said Representative Kurt Schrader – one of the four politicians who launched the Bill.

“I take my hat off to both organisations for putting aside their historical differences and working together to reach a deal that provides certainty for our farmers while providing improved conditions for the hens,” he added.

But the National Pork Producers Council has criticised the legislation, saying it would set a “dangerous precedent” and allow the federal government to regulate production practices.

“If enacted, it would open Pandora’s Box for special interest groups to pursue similar federal laws on pig farmers.”