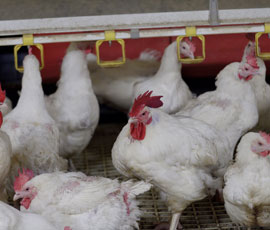 The US Food and Drug Administration intends to restrict the use of cephalosporin antimicrobials in poultry production in a bid to preserve their effectiveness in treating human diseases.

The new order, which could come into effect as early as April 5, 2012, will ban “extra label” or unapproved uses of cephalosporins in chickens and turkeys.

“We believe this is an imperative step in preserving the effectiveness of this class of important antimicrobials that takes into account the need to protect the health of both humans and animals,” said FDA deputy commissioner, Michael Taylor.

But industry leaders are concerned that veterinarians’ control over the treatment of animals could diminish.

“We share the concerns of others that the FDA’s rule on extra label drug use will take medical decisions to treat animals out of the hands of veterinarians,” said Tom Super of the National Chicken Council. “We question any substantive link or scientific basis between veterinary use of cephalosporins and antibiotic resistance in humans.

“Inspectors test meat samples for chemical and antimicrobial residues – poultry must be in compliance with USDA standards,” he added.

“When anti-biotics are used in chicken production, strict withdrawal periods must be followed before the birds are processed for food. Chicken consistently has the best record of any product tested by the USDA.”

“We are committed to the judicious use of antimicrobials in food animals,” said association president, Rene Carlson. “While this measure appears to be consistent with our position, we will continue to review any further restrictions to make sure they are backed by science and don’t place arbitrary and ultimately harmful limits on veterinarians’ ability to treat animals and ensure a safe and healthy food supply.”

The AMVA is currently evaluating the planned restriction of cephalosporins and is expected to submit a response to the FDA before the consultation period closes on 6 March, 2012.

• Do you have a view on the use of antibiotics in poultry production? Visit our Poultry Platform forum debate.