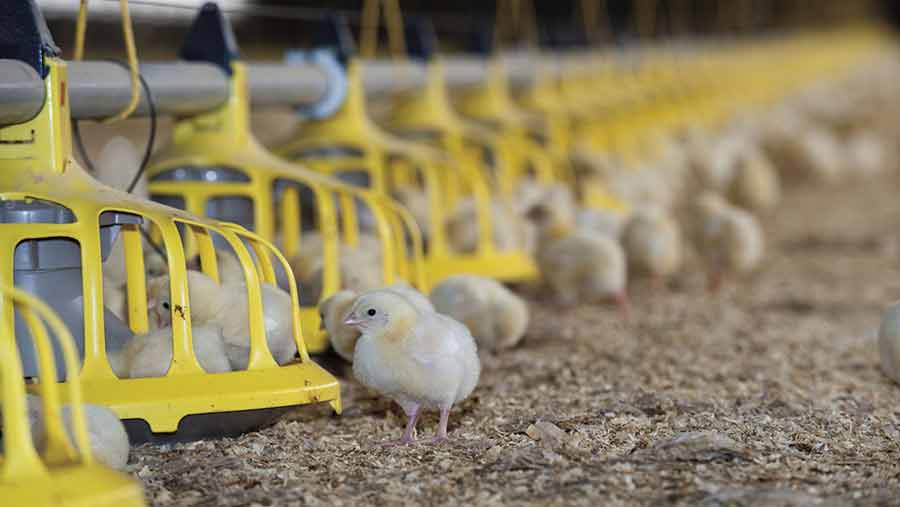 The early period of any creature’s life is crucial to its health and performance as it gets older. And in no production animal is this truer than for broiler birds, which have a window just days wide to get off to a strong start.

“Chick start appeals to my slightly fastidious nature,” says Crowshall Vet Ian Lowery, and it’s clear this rings true through the enquiries he is undertaking with farmers he works with.

From monitoring temperatures across every part of the shed, to correlating water consumption with lighting regimes, he argues there is a lot more that poultry farmers could be doing to measure and monitor performance.

“We are not anywhere near genetic potential,” Mr Lowery told the recent Wales and West poultry meeting. “There are lots and lots of things that are holding us back.”

A key way to access that untapped potential will require more detailed data monitoring, Mr Lowery explained. In particular, the uptake of feed, water and shed temperature in the crucial first days of life should be forensically monitored and, where possible, benchmarked against other flocks.

One example was a farm in which water meters had taken readings every two minutes for an entire flock cycle, on a farm of eight sheds – that data set came to 32,000 readings per house. “When I first opened it up I thought ‘what am I going to do with that?’”

But plotting the numbers turned out to give an early warning of health challenges – and an insight into birds’ drinking behaviour.

When organised into a meaningful graph, it was revealed that birds drank when lights came on, ate then intermittently drank throughout the day. They also knew the lighting schedule’s routine, evidenced in a late spike in consumption just before lights out.

The real value in the exercise came at day 17, three days before a health challenge.

“We saw that the established pattern of water consumption started to fall apart, then returned to normal. But nasty litter conditions emerged.” It was a clear indicator that there was a problem before it manifested in bird illness.

Another experiment saw 12 temperature probes installed in a shed, giving a reading for each region in real time.

“Things were pretty much where they ought to have been, but suddenly, at around day 12, it became too hot. This continued all the way to thinning when suddenly it got cold again.”

Mr Lowery said temperature was a key thing to get right, and this enquiry had shown that, despite the usual temperature readings in the shed being normal, the reality was far different when the spread of the shed was taken in to account.

“The temperature you’re reading on your probe is not the same as that being perceived by the chick,” he suggested.

A number of producers he works with are now using it as a key tool, he said. One enquiry using a sample of 20 birds’ rectal temperature every day revealed body warmth across the flock is incredibly volatile until becoming more uniform at around 500 hours.

“Those birds did fine, they had a pretty respectable FCR – but it strikes me that there is potential to get that uniformity in place earlier,” said Mr Lowery.

Humidity was also important to consider. The Ross breed guidelines were an example of this: a shed at 80% humidity would only need to be at 27C when chicks are placed. By contrast, at 40% relative humidity, the temperature would need to be 37C.

“My general feeling is that people do a good job. But my argument is that it is all about finding those early margins and exploiting them. Where you will really see that performance gain is in the early days of life.”

*This report is based on a paper given at the recent Wales and West Poultry meeting.

Along with temperature, early access to feed and water is also crucial to a good chick start. A good place to begin is with accurate recording of crop fill, according to Mr Lowery.

“It’s easy to walk into a shed and say ‘they look fine’ – it’s another thing to know exactly how many birds have crop fill after 24 hours, and if it’s less than 95%, then question why,” Mr Lowery added.

It could be a draft, feed availability or a whole range of other issues – finding the problem means first recording it. And keeping that record over successive crops will allow for comparison with good and bad.

Another focus should be providing clean, fresh and cool water. “You should be lowering water pressure with the aim of getting a hanging water droplet initially, and after two to three days increase the pressure. Tap the nipples to make sure adequate flow rates can be achieved.”

Another tip is to make sure priming the lines is the last thing that happens, said Mr Lowery: “Do it just as the chicks are coming down the drive so that you have got good, fresh and appealing water immediately available.”

Finally, in the first few days, it is increasingly common to flush the drinker lines daily. “There are two advantages to this,” he added. “The first is that you get fresh water for at least a small part of the day, and the second is that bucket of water flushed out can be left in the shed and will raise humidity.”

Though not necessarily gender-specific, here are some essential tools for improving data recording for chicks’ first few days.