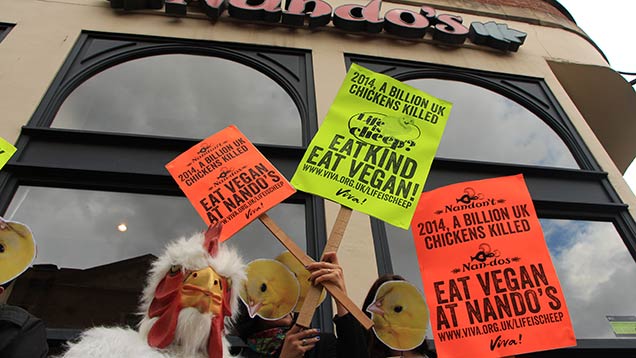 Members of vegan and vegetarian group Viva! protest outside a Nando's store.

Vegetarian and vegan charity Viva! has launched a campaign aimed at turning consumers away from chicken and towards a meat-free diet.

Images of poorly-feathered broilers and crowded sheds, taken uninvited on poultry farms, form the cornerstone of its campaigning.

The charity helped with covert filming taken by the Guardian newspaper earlier this year.

It has previously campaigned against free-range egg production, arguing it is akin to “factory farming”.

Viva! says it will accompany imagery with large-scale leaflet drops, and plans to distribute 100,000 in the coming weeks. It has also held peaceful demonstrations outside Nando’s restaurants, encouraging diners to choose from the vegan menu rather than selecting poultry.

Literature distributed by the charity plays on the fact 945 million chickens are slaughtered a year – accounting for 94% of all animals by headage. Leaflets run the headline: “By the time you finish reading this, 3,500 chickens will have died.”

Campaign manager for Viva! Justin Kerswell told Poultry World the campaigning by the charity would be ongoing, and ran under the banner “Life is Cheep?”

“The bottom line is chickens are the most killed animal. They are plucky, delightful little animals with similar cognitive abilities to higher primates, yet are treated as commodities, devoid of hope, fear or pain.

“You can buy a chicken for less than a pint of beer,” he added.