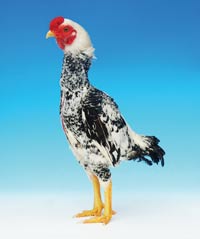 This month our pure breeds reporter heads to Shropshire.

David Lloyd has been showing poultry for more than 60 years, but he has never had a day like the one he had at the Malpas and Whitchurch Spring Show.

The club has never seen results like these before. He very nearly won absolutely everything.

David is unusual in being equally passionate in both soft and hard-feather breeds. Therefore, it has always been impossible to place him clearly in either camp.

His dual entries allowed him to win so many red cards that it seemed as if the Cumberland judges were playing a bizarre joke.

In the Soft Feather classes, his two most notable achievements were winning the Wyandotte classes with a bantam white male, and the Orpington classes, also with a bantam male. The latter went on to become the Champion Soft Feather and ultimately Show Champion.

He won so many game cards that they can’t all be listed. But some of the key wins were the bantam championship with a Spangled Old English cockerel while also taking the large Black Game classes. He completely dominated the large game fowls in both the males and females. In the Silver Duckwings, he even took both first and second in all areas.

It was a truly outstanding Blue Grey Carlisle cockerel which went on to win the Hard Feather Championship and ultimately take the Reserve Show Championship. In fact, this outstanding bird is no stranger to top awards having been the best AOC (any other colour) at Carlisle, which is now ranked as the biggest club show in the world.

David is particularly proud that every winning bird was bred on his farm and that no stock whatsoever has been bought in.

David brought along a friend, Mel Powell, who is relatively new to showing poultry. He also had a remarkable day for a newcomer, winning the Black Red Old English Game classes and the Ko Shamos with a memorable bantam cockerel.

One of the few areas that David didn’t dominate was the rare breeds. It seemed appropriate that Robin Benson should win these sections, as he’s been a great ambassador for rare breeds in this area. As chairman of Malpas and Whitchurch Club, Robin has helped resurrect one of the most important clubs along the Welsh border.

To see all Mike Corrigan’s pictures from the show, visit our Poultry Winners picture gallery. 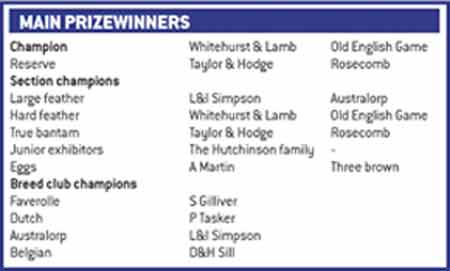