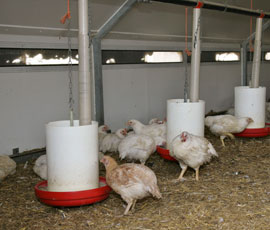 The NFU has successfully lobbied for new EU regulation that will allow organic poultry producers to use up to 5% of non-organic protein in rations.

Until the end of the last year, producers were allowed to feed 5% of non-organic feed to pigs and poultry.

EU legislation, which was set to come into play on January 1, 2012 would have required producers to use 100% organic products within the diet, leaving many producers worried they would run short of raw ingredients.

But new rules mean that producers will be allowed to use a small proportion of non-organic protein, which is unavailable in organic form, until the end of 2014.

Other amendments made to the ruling stated that:

The NFU said clarifications needed to made in terms of what “region” meant, but added that the UK would continue to regard it as requiring that a percentage of the feed should be of produce from the same climatic region as the animals, such as north west Europe.

Martin Humphrey, NFU organic poultry representative, said: “I am pleased that the EU has come to a decision gives organic poultry producers the scope to continue with high levels of nutrition that provide birds with good welfare.

“In addition, we are able to continue to access the necessary ingredients required to ensure that the bird meets all their requirements. We have been calling for this change since June 2011, and are delighted the EU agrees with our assessment of the situation.”