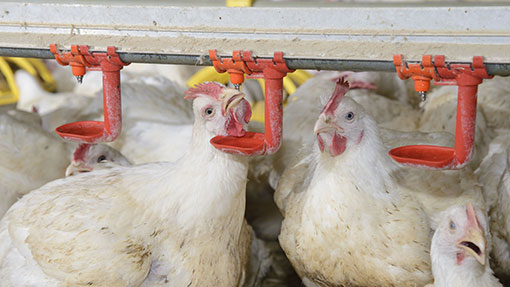 More than 280 delegates are attending the Egg and Poultry Industry Conference (Epic) at the Celtic Manor Resort in south Wales – the first time it has been held at this location.

Best quotes from the conference

“Pathetic does not begin to describe [the EU Commission’s response to Greece and Italy flouting the 2012 cage ban]. It’s almost enough to make you vote Ukip.”
Andrew Joret


“I met the Food Standards Agency last week, and they are full of praise for the steps the industry is taking to control campylobacter.”
George Eustice

1. There’s no reason the UK can’t be self-sufficient in poultrymeat and eggs. For egg, the UK stands at about 87% self-sufficient and 80% for poultrymeat. The biggest challenge is in finding ways to add value to the darker cuts of meat and less valuable liquid egg white.

3. Those negotiating trade agreements with third countries must consider the implications. Boiling spent hens to remove meat for processing was a thriving industry 25 years ago. Ending the tariff allowed the market to be undercut by imports and today, almost every cooker has disappeared.

4. Retailers are being squeezed by the discounters and internet shopping. They have been wrong-footed by having large out of town stores, when people are now buying little and often on the high street or online. We have not seen the last of this by a long shot.

5. Everyone, even the animal welfare non-governmental organisations, are now saying a ban on beak trimming in 2016 is too soon. The review will be after the general election, but if beak trimming can continue, the egg sector will still have to implement on-farm interventions that trials have shown to make a difference.

1. Cutting red tape remains a government priority, and Defra is keen to do more with “earned reputation”, so that producers who are doing a good job are not subject to over inspection. The planning system also needs to be made simpler and faster, to allow producers to expand.

2. Free trade negotiations must proceed. The Transatlantic Trade and Investment Partnership talks with the USA could reap the UK economy £10bn. Government is sensitive to issues like surface washes on chicken in the USA, and higher welfare standards in the EU, but needs to work through them. We need to recognise “equivalence” rather than expecting everyone to have identical regulations.

3. Food scares can still be very damaging to an industry. There is a particular problem with campylobacter in the poultrymeat sector and everyone has a role to play, especially processors. But the Food Standards Agency is full of praise for the steps the industry is taking already.

4. The government will continue to resist attempts by Brussels to force producers to be either 100% organic or 100% conventional, but not both. Farmers are totally capable of keeping their operations separate. Such a rule would force many out of organic production.

5. It is more important to get the right decision on beak trimming, rather than a quick decision. It should not be determined by the electoral timetable. If beak trimming continues, the industry must apply the lessons learned. It should also do more to incorporate the calmer traits of white birds into the genetic profile of commercial brown layers.