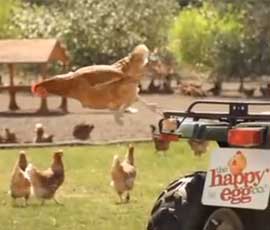 A TV ad by the Happy Egg Co has been cleared by the Advertising Standards Authority after an investigation.

The TV ad showed chickens running around in fields and jumping into sand pits to the music from Chariots of Fire.

The voice-over stated “at the Happy Egg company we do things differently. We create the perfect environment for our free-range hens to run, jump and play, because happy hens lay happy eggs and happy eggs are wonderfully tasty.”

The ASA acknowledged viewers concerns that the news report contradicted the impression created by the advert.

“However, we also understood that the report did not reflect conditions on all farms that supplied the Happy Egg Co, and according to the RSPCA had not explained that the birds who were suffering were already under veterinary supervision for a specific condition which caused feather loss,” it said.

The watchdog added: “We considered most viewers would see it [the ad] to be a humorous depiction of the life of a Happy Egg Co chicken.

“Because of that, and because the Happy Egg Co sent evidence that showed they adhered to the RSPCA Freedom Food Scheme, used gold and platinum graded free-range farms only, and had invested in activity kits for their chickens, we concluded the ad was not misleading.”