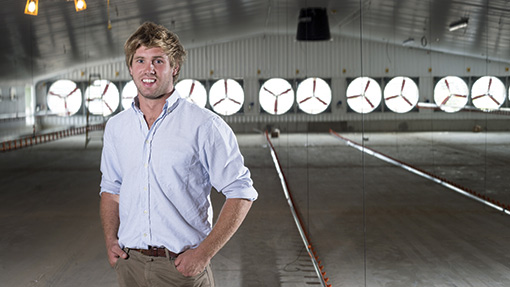 “A real learning curve” is how Harry Shepherd describes his first months as a broiler farmer, pointing to disease challenges and equipment issues that have all added to the mix.

“I’ve been working towards getting the systems to a point where management is spot on, but it’s been quite difficult,” he says.

Talking to Poultry World in his office, which is bolted on to the side of his shed and incorporates a viewing window, he describes eight months of tweaking the environment, watching birds closely and continually learning new tricks to improve performance.

Despite setbacks from disease and unplanned costs, the first three crops have registered decent EPEF (European Production Efficiency Factor) scores of 332, 352 and 391 respectively, demonstrating a steady march towards the coveted 400-plus score – something Harry clearly has his heart set on.

“I’m trying to get to the point where it’s absolutely spot on and I get high performance every time.” This is the learning curve he wants to overcome before building a second shed, though a provisional date of April next year has already been set.

Poultry World joined Harry for our second visit to his farm near Thirsk, North Yorkshire, as the chicks were being tipped for his fourth crop, He is determined to maximise bird performance and minimise the risk of disease.

His first three crops – particularly the first – encountered leg problems, including tibial dyschondroplasia and higher-than-average hock burn and pododermatitis. Harry feels the root cause of this was residual moisture left in the settling concrete floor of the new building.

To avoid a repeat with the latest crop, the shed has had a three-and-a-half day preheat. This meant an initial 31.5C floor temperature two days before placement, and by the time bedding was laid and chicks were ready to go in, it was up to 34C-35C. “I think it’s crucial to get floor temperatures up and give the chicks the best possible start,” says Harry. “Gas usage has gone up, but as we go into spring, hopefully the cost increase won’t be too bad.

“A lot of people have said tighten up on my gas usage. But if you get a good amount of heat into a shed, you can ventilate more and get a better environment.” The shed is currently using direct propane gas heating, but indirect is the eventual aim, he says.

On arrival, the chicks are given a three-day medication to counter the risk of yolk sac infection, which blighted the first few crops.

Other measures designed to improve flock health include using a large fork to turn the litter underneath the drinking lines every other day. “I’m trying to stop the bedding from capping; once it caps you’re potentially not using good bedding underneath that cap,” he says. This practice goes on from around day six to day 21.

Another change has been switching from woodchip to shavings, something that’s “massively improved things”. Harry feels this is better for absorbency, even though it adds further cost.

A further adaptation introduced for this fourth crop in an attempt to boost bird health and lift performance is the Flockman Mini system. This prevents ad-lib feeding by filling pans strategically throughout the day, combined with different light and dark patterns. The idea is to get as many birds as possible eating, not just the dominant ones.

But one of the best investments made since the shed went up last year has been catching curtains and lights. “They have paid for themselves 10 times over,” says Harry. A run of blue-tinted lights allows catching teams to see, while keeping birds placated. And blackout curtains at the gable-end doors minimise outside light coming in while catchers are in and out.

Harry grows for integrator Sullivan Poultry, part of ABN, which supplies a number of ethnic markets. He splits sexed chicks in his shed, with pullets taken at first thin. A second thin before final depopulation makes it crucial to get catching right, for the health and welfare of the birds that are remaining in the shed. Keeping birds calm minimises staphylococcus and other stress-related illness.

Further investment has been aimed at improving biosecurity. An inexpensive powerwasher, which Harry uses every Friday to keep the shed’s surroundings and control area tidy, was an early purchase, as was a six-inch high physical barrier separating the “clean” and “dirty” sections of the shed.

Keeping curious friends and family away was difficult in the early days. “When the first crop went in, a lot of people wanted to come down. It was hard to discourage them. Now I’m settled, it’s easier, I don’t get many people down here.”

At depopulation Harry has so far kept to his original plan to muck out himself, citing a concern that contractors may not take enough care with the building. He hires a skid steer and takes a day to clear out litter, which is sent to a farmer about four miles away. “I wouldn’t want it any closer because of the disease risk,” he says.

Following this, a team of washers comes in the next day, though Harry cleans the fan outlets and roof vents himself.

When it comes to the business plan for the shed, financial performance is roughly where predicted. “Things are chugging on alright at the moment,” he says. “In the first crop, I didn’t have my own electricity, I was going off my own backup generator, which cost a fortune in diesel. Getting my electricity supply in has helped quite a bit.”

The next big project will be a biomass boiler, something Harry hopes to install during the July turnaround. Here, forethought with his original construction has paid off; wiring has already been installed in the roof so that indirect heaters can be retrofitted, and foundations have been dug for the biomass boiler.

When it comes to the design, friend and mentor Ed Barker has built his own boiler, and that’s the route Harry is considering. He is also hoping to finance the project himself, as a long-term investment in the business.

Some equipment has not performed as well as Harry might have expected, including the gable-end fans, which don’t hold the shed’s heat as hoped for, creating cold spots and causing average temperature to drop.

There have also been problems with the roof fans in high winds. “I do struggle with the butterfly flaps, which open quite a bit in wind, and I have to get on the roof, which is dangerous.”

At the moment, learning and running the shed is occupying all of Harry’s time. But as work picks up on local farms he’s considering some part-time work as a change of pace, though he is dubious about leaving his shed unattended. “I’m just concerned that if I get any alarms, I need to be able to get back here,” he says.

“It sounds sad, but I just sit in there and watch what the birds are doing and what they want, watching drinker heights and if they are getting access to them, things like that. It’s the performance of this crop in particular that will help determine if another shed is to go up as planned in about a year’s time.

“That time spent observing will stand me in good stead for the future, when hopefully there’s more than one shed to manage.”