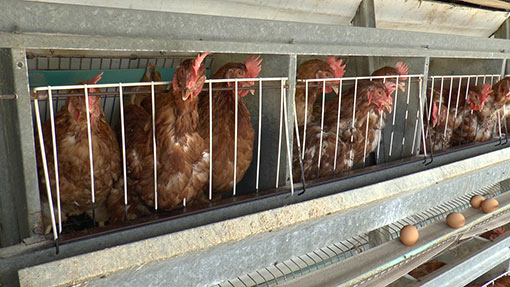 An illegal barren battery cage egg farm is continuing to operate in Greece, according to an investigation by Compassion in World Farming (CIWF).

An EU-wide ban on battery cages was introduced in 2012, though at the time 14 EU member states (including the UK), were non-compliant. Over the following months most came into line, so that, by the end of the year, only Italy and Greece was still defying the ban , with an estimated 20m birds in barren cages.

The EU Commission started court proceedings against the two countries in April 2013, and in May 2014 it declared that Italy had been found guilty of flouting the law, though the Italian government was only ordered to pay costs.

The case against Greece is still ongoing – and so too is the problem of illegal egg production, according to CIWF.

Video footage shows brown layers, stocked four to a cage, in a three-tier unit. It also shows young pullets in a caged environment, which CIWF suggests shows the unit is planning for another 18 months of cage production.

“This is an utter disgrace,” said CIWF policy adviser Peter Stevenson. “It is unfair on British farmers and others within the EU, who have invested heavily in complying with the ban if they have to compete with illegally produced eggs in Greece.”

“Greece should not be allowed to get away with this when the rest of the EU 28 have managed to discard barren battery cages. We should boycott eggs and egg products that have been produced in Greece – unless there is proof that it is farmed to a higher welfare standard.”