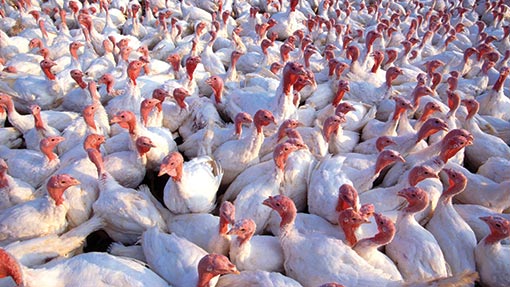 Susceptibility to foot pad dermatitis (FPD) in turkeys is something that is likely to respond to genetic selection and could bring economic benefits, according to Paul Hocking from the Roslin Institute.

Addressing the recent Turkey Science and Production Conference in Chester, Dr Hocking said the latest research had confirmed that excess water in litter was the primary cause of FPD.

This in turn was the result of excessive water intake, which was a necessary physiological response to high dietary potassium in soya-based diets.

“However, the causative agent of FPD is exposure of the foot pad to water,” said Dr Hocking, who suggested that moisture content should be kept below 30%.

Different genotypes, including a traditional breed, had proved to be equally susceptible to FPD at a high litter water content over 70%.

However, wide variations between individuals within each breed line suggested there was an opportunity to carry out genetic selection for resistance to the condition.

Previous research had shown that FPD developed at an early age and was an immune response, rather than an allergic one.

Wood shavings were better than other materials at limiting FPD and, although the condition developed rapidly, the lesions healed within days when the birds were transferred to dry litter.

The latest research also found that the severity of the condition, assessed by a scoring system, increased linearly with litter moisture content. The wet litter resulted in reduced weight gain in all the commercial breeds, and in poorer feed conversion in every strain.

Further work was needed to confirm the extent of these effects, but there were strong economic reasons for finding ways of reducing the prevalence of FPD in commercial flocks.

There were also changes in bird behaviours caused by FPD which had welfare implications. “Turkeys kept on dry litter have a greater range and complexity of behaviour compared with those on wet litter,” said Dr Hocking.

The data showed that birds were less active on wet litter, suggesting that FPD lesions can be painful.